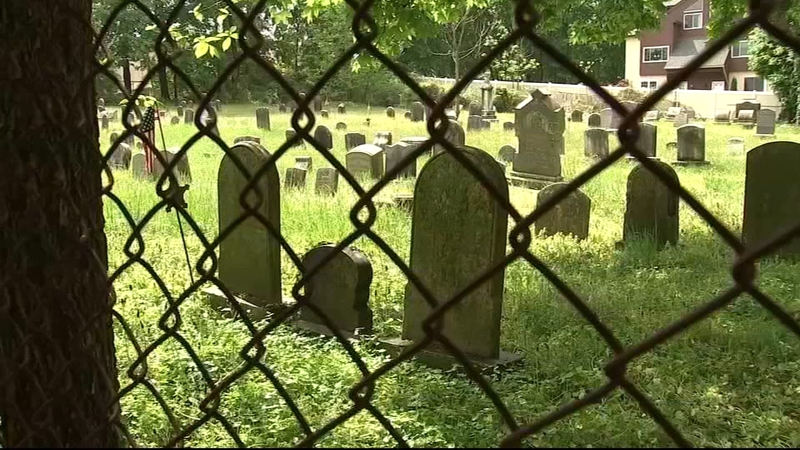 WAYNE, Pennsylvania (WPVI) -- A cemetery in Delaware County, Pennsylvania is becoming an increasing cause of concern for neighbors because it's run-down and neglected despite being the final resting place for Civil War soldiers.

"It seems like it's well-tended. I wouldn't necessarily call it orphaned or abandoned," said resident Bess Yates.

"I've been here for 30 some years and nobody has been able to tell me who owns it now, who owned it once upon a time," added Janice Bates, who lives next to the property.

You would think tracking down the owner of a cemetery, one with several gravestones appearing to belong to service members, would be a record or click away. But, you'd be wrong.

"There's been a few churches attached to this property, but at the moment, I don't believe it's overseen by anyone," explained Jake Abel, a commissioner in Radnor Township.

Abel has made it his personal mission to find either an owner or ensure the township takes over the property officially.

If you trek through what is labeled the First Baptist Church Cemetery, it's clear it's in need of some tender loving care.

"The township does a great job of maintaining it, but it's something that we as residents I think can do a better job of overseeing," Abel said.

So, why doesn't the township allows others to clean it?

"There's a liability issue. Not knowing the state of the trees. Not knowing what type of debris is found underneath the grass," added Abel.

Acquiring the land does require cutting through some red tape, but may ultimately be what's best to ensure the history here is preserved for generations to come, Abel suggested.

According to the Radnor Historical Society, which got involved with cleaning up the property back in the 1990s, found 450 graves at the site, some belonging to Civil War and World War I veterans.

"Since we're maintaining it, we might as well take it to the next step and just take ownership of it," Abel said.

The last known church to have some connection to the cemetery told Action News they have no record that directly ties them to the property.