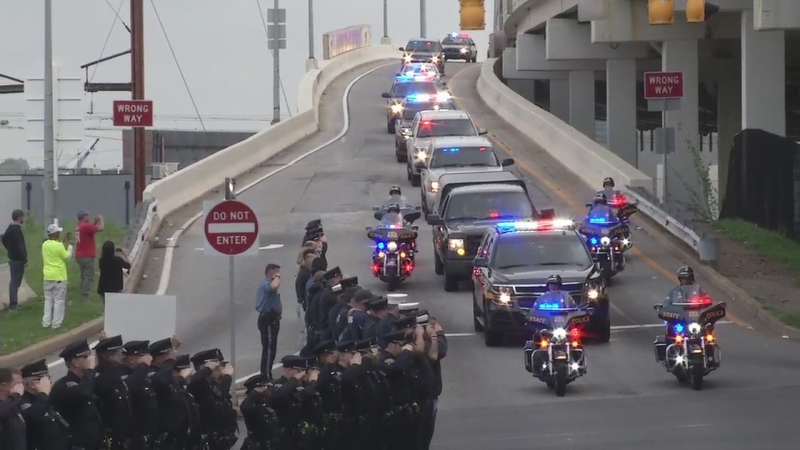 BEAR, Del. (WPVI) -- Chopper 6 and the Action Cam were there as police escorted the body of a fallen Delaware State Police trooper.

Flanking part of the 9-mile processional, residents stood silently with hands over their hearts.

"This guy has a family and now his family is heartbroken because he's not coming home now," Zutell said.

"He's doing his job and put his life on the line," Stanley Roberts of Newark said.

Powerful images from Chopper 6 showed people pulling over on the side of the road to pay their respects. Cameras showed a flurry of flashing lights upon arrival to the state medical examiner's office in Wilmington.

Cpl. Ballard graduated from the Delaware State Police Academy in 2009, and was an 8.5-year veteran on the force.

He was recently married and is a member of was the local Delaware chapter of NOBLE, also known as the National Organization of Black Law Enforcement.

"He has a very contagious personality. He's very engaging and very much committed to helping people. He died doing what he loved and it's ashame because he's such a good person," New Castle County Public Safety Director Joseph Bryant, Jr. told Action News.

Ballard graduated from Delaware State University where he would often go back to mentor college students.

See more raw video from the Action Cam and Chopper 6:

Video from the Action Cam at the scene in Bear, Del.
EMBED More News Videos

Video: Chopper 6 over search for suspect in Middletown, Del.

State Police announce the death of a trooper during a press conference on April 26.