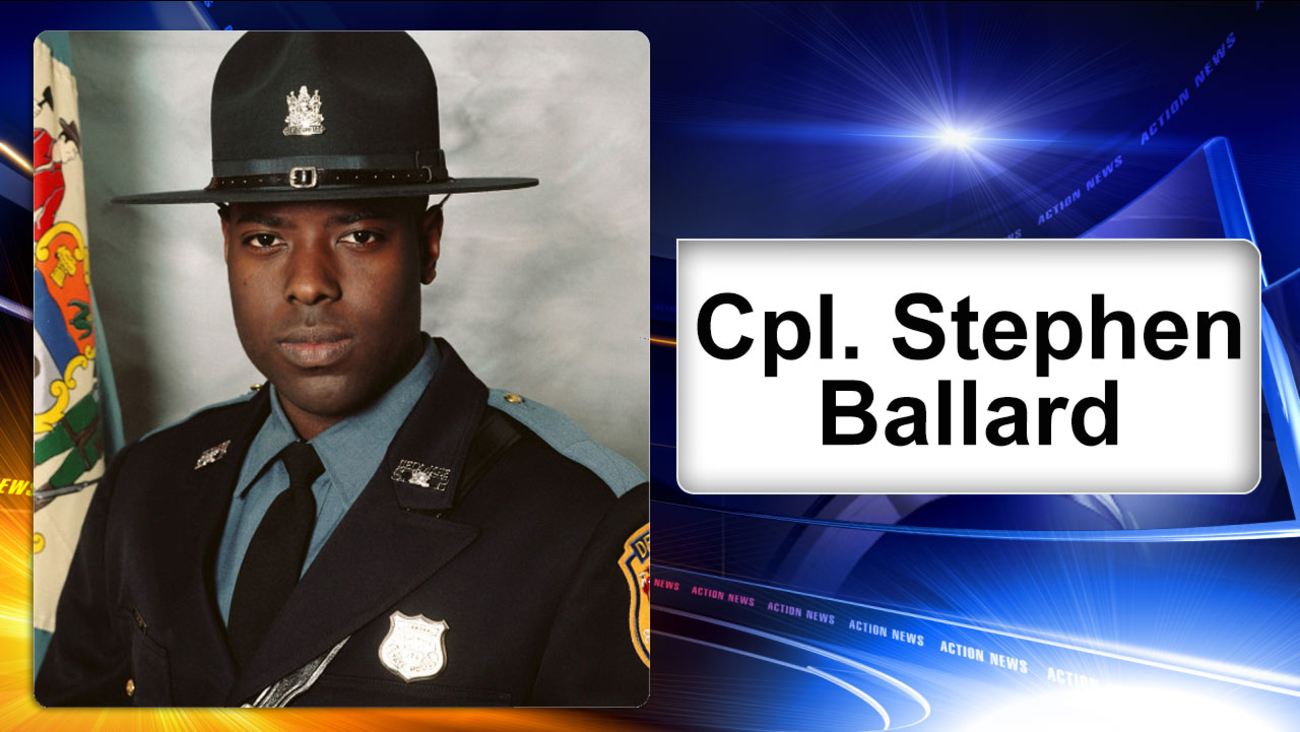 MIDDLETOWN, Del. -- The widow of the Delaware state trooper killed this week in the line of duty says her husband was proud of his job, wanted to get to know people so he could help them, and had dreams of becoming the state's governor one day.

Cpl. Stephen J. Ballard, 32, died Wednesday after approaching a vehicle with two suspicious people outside a convenience store in New Castle County. Burgon Sealy Jr. fatally shot the officer and was ultimately killed by police Thursday after a lengthy standoff. Authorities have not said anything about Sealy's possible motive.

Ballard's wife, Louise Cummings, said in a telephone interview Friday that her husband was "very proud of his work in law enforcement," and wore T-shirts with the Delaware State Police emblem even when he was off-duty.

"He wanted people to know what he did," she said.

The two met in 2013 at the graduation party of a mutual friend's son. She was told he was a "loving and kind man" and a "good man with a good job." What struck her most was that he was "just full of life," she said.

They enjoyed spending time at the ocean, going to the Rusty Rudder in Dewey Beach and listening to a calypso band or sitting on the boardwalk to people-watch.

He enjoyed trips to Philadelphia and older soul and R&B music, though his favorite artist was Prince. Together they visited Playa del Carmen in Mexico. And after they married in 2015, they honeymooned in Grenada in the Caribbean.

But winter was his favorite time of year, she said. An only child, he loved Christmas and spending time with family, including his 5-year-old stepdaughter.

Cummings said her husband, a 2003 graduate of Bowie High School in Maryland, initially wanted to be a pilot but became interested in criminal justice in college. After he graduated from Delaware State University in 2007 he returned to mentor students because he wanted them to learn from his experience and stories, she said.

His friend Michael Woods, the best man at their wedding, said he paid his way through school working at Best Buy but could have had any career he chose.

"He loved helping people and he had a desire to serve," Woods said.

Ballard graduated from the police academy in 2009 and loved his work, his wife said. He also wanted the communities he served to have positive interactions with troopers, she said.
Ballard was involved in collecting food for families at Thanksgiving and kept coloring books and gifts in his patrol car, especially around Christmas, to give them to kids. He was especially skilled at "getting people to come to a common understanding," his wife said, and he enjoyed helping kids learn from their mistakes, she said.

"He was very interested in getting to know people so he could help them," she said.

Someday, she said, he hoped to be governor.

Cummings said she told her husband: "I think you should stick to community organizing." But he had higher aspirations. "I don't really know why," she said. "It was an innate thing."

"He wanted to effectuate change. He wanted to be able to control that on a higher level," she said.

Raw video: The Action Cam was there for the dignified escort for a fallen Del. State Police trooper.

Cummings said negative national news about law enforcement including police shootings discouraged her husband and it concerned him that people would not like the police, but she said that "never stopped him from being proud" of his work.

A memorial fund has been set up in Ballard's name.
Checks can be made out to: