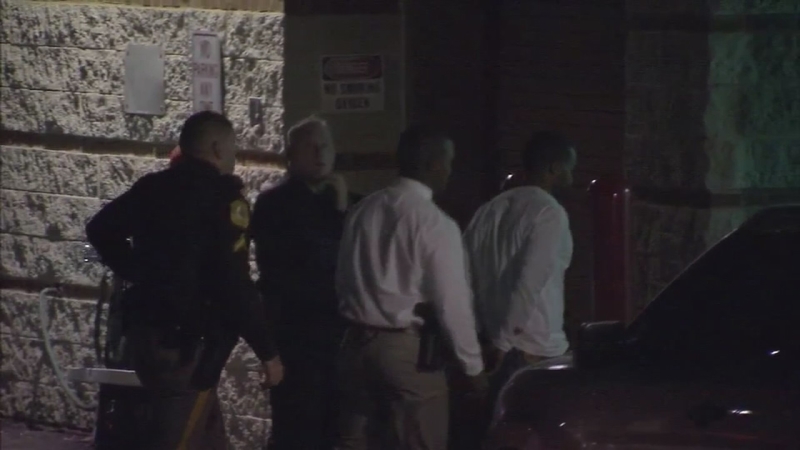 Bail for 37-year-old Radee Labeeb Prince was set at $2.1 million.

Prince was captured by federal agents in the area of Glasgow High School in Newark, Delaware around 7:05 p.m. Wednesday, officials said.

Chief Robert Tracy of the Wilmington Police Department said a witness called into the tip line and reported seeing Prince walking on a road behind a shopping center across from the high school.

Residents where Prince was arrested speak out: Gray Hall reports during Action News at 12:30 p.m. on October 19, 2017.

According to Tracy, when Prince noticed ATF agents following him, he began to run, throwing away a .380 fire arm. Agents said after a brief chase of about 75 feet, Prince was taken into custody without further incident.

Prince is suspected of shooting five people at an office park in Maryland, killing three of them, along with the shooting and wounding of a man in Wilmington.

That shooting happened around 11 a.m. at 28th Street Auto Sales and Service in the 2800 block of Northeast Boulevard.

The victim was shot at least once in the body and once in the head. That victim is hospitalized but conscious and alert.

Police say Prince is known to have family in the Wilmington area.

"This person shot six people in one day. Three of them are dead right now. This is a person with no conscience," said Chief Robert Tracy of Wilmington Police.

"This individual knew the people he wanted to go shoot. This wasn't a random act of violence," Tracy said.

An eyewitness, who asked to remain anonymous, told us what he heard and saw.

"All I heard was a pop. I heard one pop. I see a young lady come running out, ran into the garage. Her and the other guy shut the door. Then I heard a second pop. They opened the garage door and ran out of the gate," he said.

Action News spoke to a woman, Karen Flowers, who says she knows both Prince and the victim.

Harford County Sheriff Jeffrey Gahler said Prince shot five victims with a handgun about 9 a.m. and fled the Emmorton Business Park in Edgewood, which is about 25 miles northeast of Baltimore.

Three were killed. Two other people were wounded in the shooting and were listed in critical condition.

The victims and the suspect worked for Advanced Granite Solutions, the owner of the company that designs and installs countertops told The Associated Press. Prince has been an employee for four months, working as a machine operator, owner Barak Caba told AP in a brief telephone interview. Caba was shaken and would not provide additional details.

Prince was fired from another job earlier this year after he attacked a co-worker, according to The Baltimore Sun. A former co-worker sought a restraining order against Prince in February, saying he had punched another employee and threatened employees.

"I felt very threatened because he is a big guy and very aggressive on me," the co-worker said in the application for the restraining order. The man said Prince did not get physical with him, but wrote: "I do not want to wait until he will."

A Harford County District Court judge denied the order. The newspaper article did not identify the business or co-worker.

Maryland Gov. Larry Hogan, speaking during a break from a meeting of a state board, said the survivors had gunshot wounds to the head.

He said authorities had helicopters in the air and law enforcement on the ground looking for Prince.

"The killer remains on the loose," Hogan said.

Prince has a lengthy criminal record. That includes a violent encounter in Wilmington back in January 2016.

A man told police he drove his car into Prince because he feared Prince would shoot him. There was ongoing litigation in regards to that case.

Watch raw video of authorities discusssing the deadly workplace shooting in Maryland and the search for the suspect, who has been linked to a shooting in Delaware.

Prince was fired from JPS Marble and Granite earlier this year and scared his previous employer so badly that he tried to get a restraining order in February.

At one point, Prince's former boss Philip Siason said, "He came to see me, cursed and yelled at me about unemployment benefits. I felt very threatened because he is a big guy and very aggressive on me."