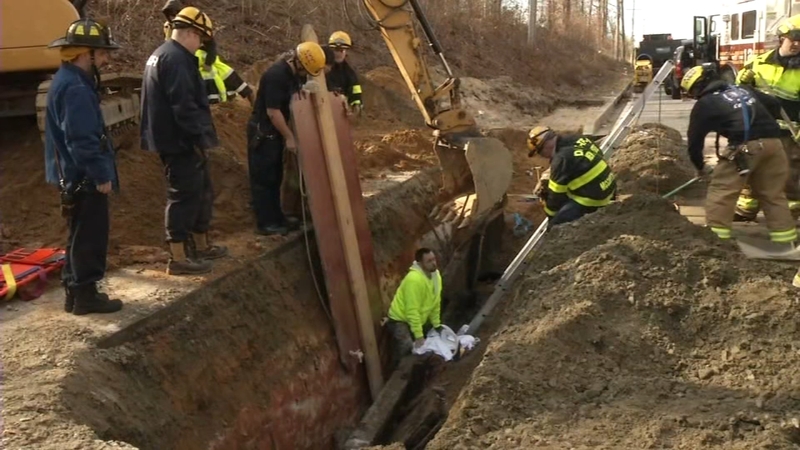 CHRISTIANA, Del. (WPVI) -- A DelDOT contractor has been freed from a trench after falling in on Friday morning.

It happened at 234 Old Baltimore Pike in Christiana, Delaware.

The worker was trapped in a five-foot-deep trench in a roadway at a construction site.

Chopper 6 was over the scene of a rescue effort in Christiana, Delaware on January 25, 2019.

The man's foot was apparently pinned by a piece of concrete.

The New Castle County Trench Rescue team was dispatched to the scene around 10 a.m.

The first step was to shore up the trench. Supports were extended across the width so the walls wouldn't cave in.

Once the trench was stabilized, it was time for on-scene treatment.
"We had heated fans that were able to blow warm air into the trench, and medics were providing pain medication for the injuries," said Dave McCarthy of the New Castle Trench Rescue Team.

The victim was also stabilized while being given oxygen and blankets.

A pulley system was connected to a fire truck ladder to help lift the victim out. Officials say an air gun was used to break up the dirt and rock around his legs and, once he was freed, he was moved.

The victim's leg was severely broken, and after being stuck in the wet cold trench for two hours he was also being treated for hypothermia.

OSHA did come here to the scene. There will be an investigation to see if proper procedure was followed.