Her attorney said she "will continue to work hard on behalf of Delaware's taxpayers."
WPVI 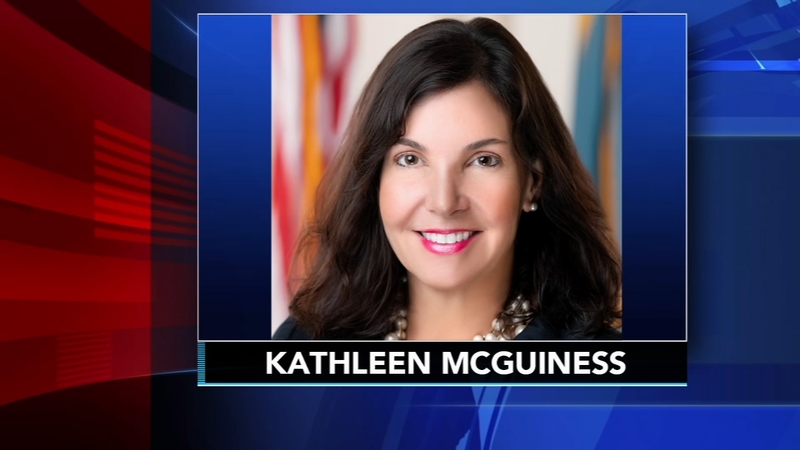 WILMINGTON, Delaware (WPVI) -- Delaware State Auditor Kathleen McGuiness turned herself in at the New Castle County Courthouse in Wilmington on Tuesday morning, one day after she was indicted on public corruption charges.

McGuiness pleaded not guilty to all charges. She is barred from contact with former employees of her office and from discussing the case with current employees.

She was released with a bail condition set at $50,000 unsecured.

A case review is scheduled for October 18.

An indictment issued by a New Castle County grand jury charges McGuiness, 58, with felony counts of theft and witness intimidation, and misdemeanor charges of official misconduct, conflict of interest and noncompliance with state procurement laws.

Her attorney issued a statement Monday saying McGuiness "will continue to work hard on behalf of Delaware's taxpayers and intends to focus on the job that she was elected to do." 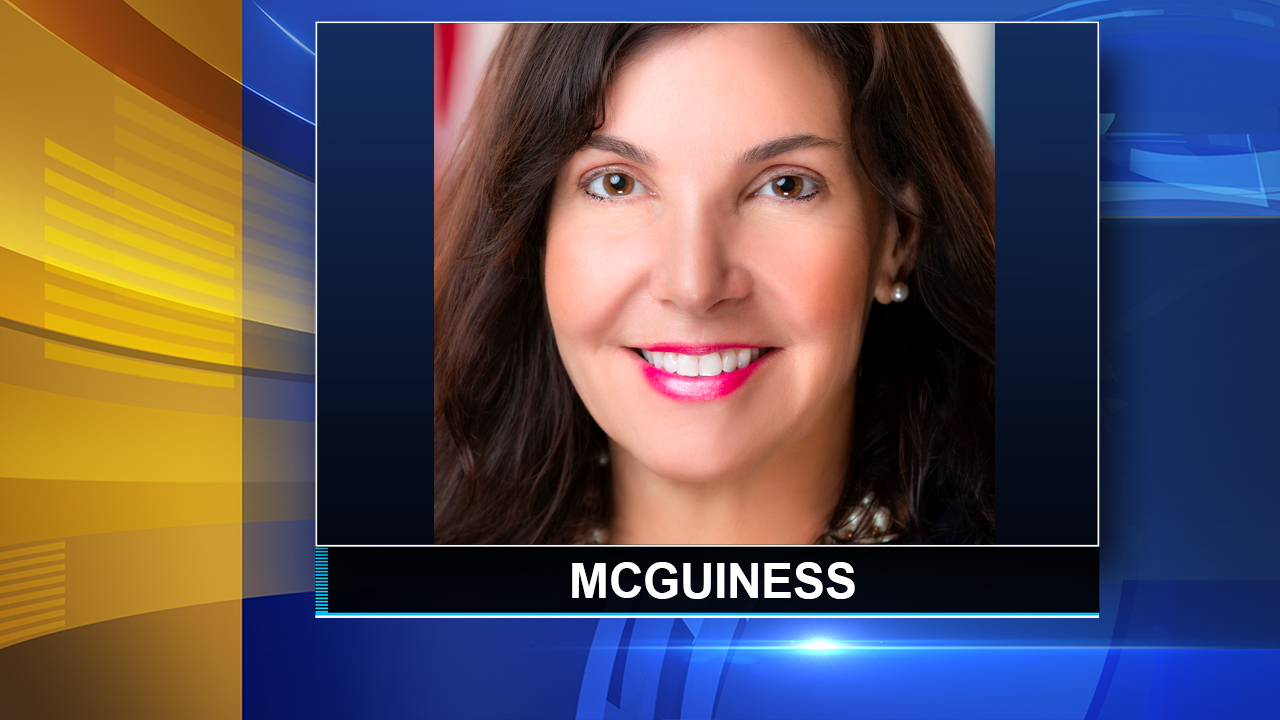 Authorities said Elizabeth McGuiness, who has not been charged, continued to be paid even after enrolling at a college in South Carolina last August, and that she was still listed as an employee as recently as Aug. 28 of this year. She was initially listed as a "public information officer" and later as an "intern."

Payments to McGuiness' daughter totaling $19,000 were deposited into a bank account for which McGuiness is a listed owner. The daughter's friend was paid more than $7,700.

"As millions of Americans, including her own employees, lost their jobs, the auditor, whose job is to protect your tax dollars from abuse, used her power to hire her daughter, no questions asked," state Attorney General Kathleen Jennings, a fellow Democrat, said at a news conference outside the New Castle County courthouse Monday. "She paid her daughter thousands of tax dollars, even when the daughter wasn't showing up to work."
McGuiness also is charged with orchestrating a 2019 no-bid "communications services" contract for a company she had used as a campaign consultant when running for lieutenant governor in 2016.

Investigators said McGuiness evaded public bid requirements by keeping the initial contract with My Campaign Group just under the $50,000 threshold that requires public bids. She also avoided getting approval from he Division of Accounting, a separate state agency, for the payments to My Campaign Group by splitting up invoices and keeping payments under the $5,000 reporting threshold.

Prosecutors also said two payments to My Campaign Group were made outside the initial $45,000 purchase order, bringing the total that the company was paid to $49,900, just $100 under the public bidding threshold.

"The auditor, whose job is to root out fraud, handed out state contracts to a campaign consultant and deliberately avoided oversight meant to protect taxpayers from the very fraud and abuse she swore to root out," Jennings said.

According to investigators, McGuiness approached My Campaign Group again in September 2020 and suggested a second contract under $50,000 but was told the contract should proceed through the public bidding process. Another company successfully bid on that contract and had been paid $77,500 as of February.

Authorities said that when employees in her office became aware of McGuiness' misconduct, she responded by trying to intimidate the whistleblowers, including submitting more than three dozen requests to the Department of Technology and Information for the contents of their email accounts. That allowed McGuiness to monitor several employees' email communications in real time, according to prosecutors, who said McGuiness also monitored the email of a former employee who now works in a separate government agency.
"When her staff discovered her misconduct and did the right thing by speaking up, the auditor, whose job is to be a government watchdog, engaged in an extensive pattern of surveillance and intimidation against those whistleblowers," Jennings said.

"If anyone should know better, it is the state auditor," Jennings added. "Instead, as our investigation has shown, Kathleen McGuiness carried out the very misbehavior that she was elected to stop."

McGuiness, who was elected in 2018, declined to speak with investigators with the state Division of Civil Rights and Public Trust, according to the attorney general.

Authorities said their investigation is continuing.

In a statement, the law firm representing McGuiness said:

Kathy McGuiness is absolutely innocent of these charges. The Grand Jury's Indictment, like all Grand Jury Indictments, was based upon a one-sided presentation from witnesses and documents selected by the Attorney General. The Indictment is full of misleading statements and half-truths.

It is true that Ms. McGuiness's daughter worked as a temporary employee in the Auditor's Office. Delaware law does not prohibit family members from hiring family members, and there have been many instances of such employment all throughout state government-including in the Attorney General's Office. It is also true that, like millions of Americans, Ms. McGuiness's daughter worked remotely during the COVID pandemic. However, the Indictment's assumption that the only way for a state worker to work remotely is by using the State's email network is false.

Ms. McGuiness has, from time to time, hired outside contractors to perform various professional, policy-related and communications functions for the Auditor's Office. Unlike the Attorney General Office, which has several full-time employees that assist with press and public relations, the Auditor's Office does not have a full-time employee to perform those functions. Furthermore, unlike many other state agencies, the Auditor's budget did not provide for a full time policy development staffer until recently. For these reasons, Ms. McGuiness hired an outside contractor to assist in those tasks. The contractor in question has performed policy development services for other elected officials in Delaware before, including a former Governor. All of the relevant contracts were entirely lawful. There is nothing unlawful about hiring a former campaign consultant to perform legitimate tasks related to government service. The Indictment fails to mention that the consultant has provided policy advice for elected officials all around the United States in the past and continues to do so today.

The Witness Intimidation charge is pure fiction, and is clearly the result of fanciful tales spun by former employees with an axe to grind.

Ms. McGuiness will continue to work hard on behalf of Delaware's taxpayers and intends to focus on the job that she was elected to do. She will have no further comment on this matter. When the whole story is finally heard, the facts will speak for themselves.
Report a correction or typo
Related topics:
doverfraud
Copyright © 2021 WPVI-TV. All Rights Reserved.
TOP STORIES
Police searching for four teens after home vandalized in Havertown
16-year-old charged with attempted homicide in Pa. mall shooting
1 dead in shooting at West Philly grocery store
Simmons tells 76ers he's not mentally ready to play: Sources
Teen shoots self in leg inside West Philadelphia school
Baldwin: 'My heart is broken' after accidental film set shooting
Rare bacteria found in Walmart room spray linked to 2 deaths
Show More
Halloween haunted houses: Check out some spooky local spots
Some are seeking solutions as violence continues in Philly
Man struck, killed by tractor-trailer in Hunting Park
Prop guns: What they are and how they can kill
Peter Scolari, 'Bosom Buddies' and 'Newhart' star, dies at 66
More TOP STORIES News