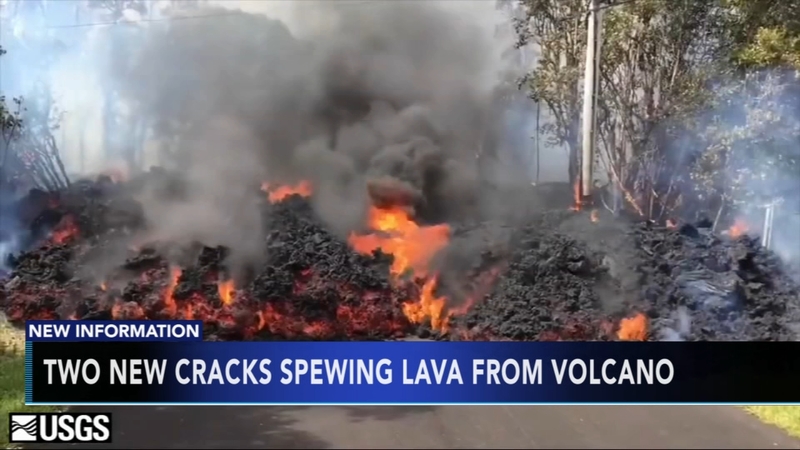 The slopes of Kilauea offer a lush rural setting and affordable land that contrasts sharply with Hawaii's more expensive real estate, but living on one of the world's most active volcanoes comes with risks: A dozen lava vents have opened in streets of the Puna district and 35 structures have burned down.

It was difficult to immediately tell from aerial surveys how many are homes and how many are other uninhabited structures, said Wil Okabe, acting mayor of Hawaii County.

Cheryl Griffith's Leilani Estates subdivision was ordered to evacuate after lava from Kilauea volcano burst through cracks in the ground, destroying homes. But the 61-year-old did not leave.

As lava crawled down Leilani Road in a hissing, popping mass, Griffith stood in its path and placed a plant in the a crack in the ground as an offering to the Native Hawaiian volcano goddess, Pele.

"I love this place, and I've been around the volcano for a while," Griffith said. "I'm just not one to rush off."

The Puna district is a region of mostly unpaved roads of volcanic rock about a 30-minute drive from the coastal town of Hilo.

Puna has thick jungle as well as dark fields of lava rock from past eruptions. The gently sloping volcano dips from its summit to Puna's white sand beaches and jagged sea cliffs.

The region has macadamia nut farms and other agriculture along with multimillion-dollar homes with manicured lawns. Other houses are modest, sitting on small lots with old cars and trucks scattered about.

For many people outside Hawaii, it's hard to understand why anyone would risk living near an active volcano with such destructive power.

But the people here are largely self-sufficient and understand the risks of their location.

Amber Makuakane, a 37-year-old teacher and single mother of two, lost her three-bedroom house to the lava. She grew up here and lived in the house for nine years. Her parents also live in Leilani Estates.

Griffith said that is the hardest part of this lifestyle - they won't be able to recoup losses. Moments later, an explosion came from a nearby burning house.

Homeowners use rainwater-catch tanks and cesspools or septic tanks. Many rely on solar power, and some live entirely off the electrical grid.

Sam Knox, 65, who was born in Hawaii and now lives just a few hundred feet from a volcanic fissure, said he decided not to leave, despite the nearby explosions and the lava being hurled into the sky and flowing across his neighbor's property.

"It was roaring sky high. It was incredible. ... Rocks were flying out of the ground," he said. Much of the area filled with lava in just four hours.

Kilauea (pronounced kill-ah-WAY'-ah) is one of the world's most active volcanoes and has been erupting continuously since 1983. There's no indication when this particular lava flow might stop or how far it might spread. Scientists from the U.S. Geological Survey expect the flow to continue until more magma drains from the system.

On Sunday, some of the evacuees were allowed to return briefly to gather medicine, pets, and other necessities. They will be able to do so each day as long as authorities believe it is safe.

Knox has some belongings packed in case he has to make a fast escape.

"I decided to stay because I wanted to experience this in my life," he said. "I'm ready to actually evacuate, but if I don't have to evacuate, I'm just going to keep staying here because I don't have no other home to go to."