DiPaola Turkey Farm in Hamilton, a Thanksgiving tradition for many 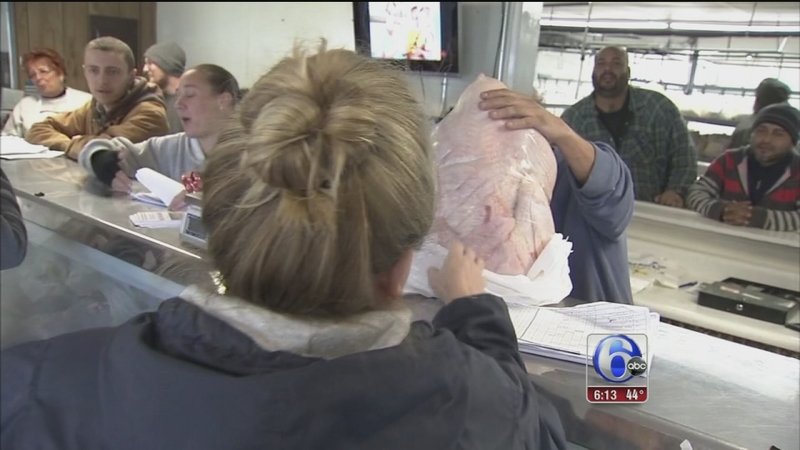 HAMILTON TWP., N.J. (WPVI) -- The countdown is on to Thanksgiving and no one knows that more than the folks at the DiPaola Turkey Farm in Hamilton Township.

"This is our busiest day of the whole entire year," farmer Kristen DiPaola said.

DiPaola who along with the rest of the crew has been working her tail off.

"It's been crazy; we've been doing about 10,000 birds this year and no sleep, basically," DiPaola said.

While a police officer handles traffic, waves of customers come to pick up their fresh turkeys which are going for $3.59 a pound. You get a number when you order ahead of time and it's all cash.

"I would rather just get a fresh local turkey than a frozen one from the grocery store," Aimee Daly of Robbinsville, NJ said.

Talk about loyal customers, some have been getting their turkeys at DiPaola's for decades and wouldn't hear of buying one anywhere else.

"20 years I've been coming here; they have the best fresh turkey around," Richard Grey of Yardley, Pa. said.

Joan Hartman had her first bite at a friend's house more than half a century ago and has been coming here ever since.

"I said to her 'this turkey is wonderful. Where did you get it?' And she said 'DiPaola's.' So here we are," Hartman said.

"It's the greatest joy that I have throughout the year to watch people, generations upon generations, coming in here to pick up their turkeys for the holiday. It doesn't get any better than this," farmer Art DiPaola said.