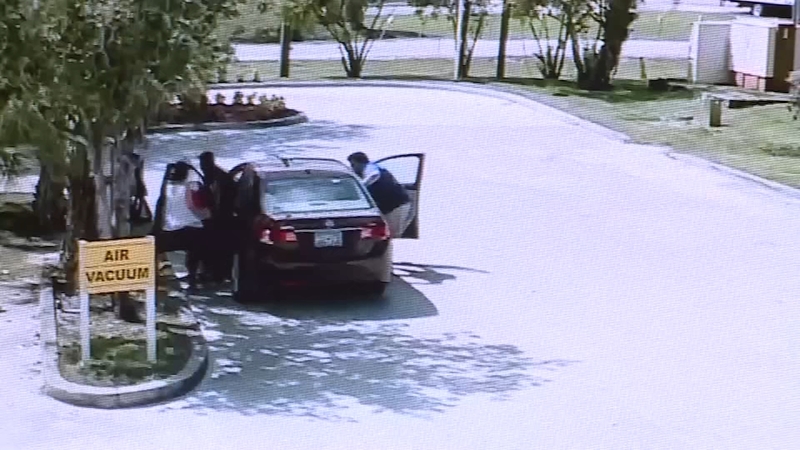 PALM CITY, Fla. -- A man suspected of violently carjacking and kidnapping a family headed to Miami from Orlando is now in custody.

The South Florida family was carjacked at gunpoint with their infant in the back seat, reported WPBF.

The baby's mother fought the suspect, begging him to not take the car with the baby inside.

"They were coming back from Disney. They were tired so they were just going to take a break," said Martin County Sheriff William Snyder.

Their exhaustion from the long day was why this family was parked in the shade at a Palm City gas station.

They weren't expecting a man to walk up, open the door, and try to pull out the woman in the driver's seat.

"He yanked her out of the car and was fighting with her, and she did not want to go" said Joanne Sagona.

The woman fighting back was Sagona's daughter Jaime.

"That was a mama bear," Sheriff Snyder said. "And she was responding to the fact that she had a newborn, a 4-month-old in the backseat."

Jaime kept fighting as her brother Andrew jumped out of the passenger seat.

"He was pointing the gun in the car, so it was tight quarters," Sagona said.

One final punch and Jaime went down as the suspect started to drive away.

Jaime and Andrew make one final attempt to stop him but he pulled away with Sagona and the baby still in the car.

"And then I started fighting with the man," Sagona said. "He was pointing the gun at the baby. He was going to kill somebody. The only chance we had was to get out."

Joanne begged the man to pull over and after about a mile down the road he did, allowing Sagona to grab the baby and get out.

Monday afternoon the suspect, identified as 21-year-old Jaquay Jean, was arrested in Miami and transported back to Martin County.

When asked if there was anything Jean wanted to say to the victims, he replied, "I'm sorry!"

In the end, Sagona said they were lucky. Jaime is badly bruised but she's alive.

"She's in a world of hurt, but she's not dead," Sagona said. "So you can recover from that. You don't recover from a gunshot right to the face, two inches away."