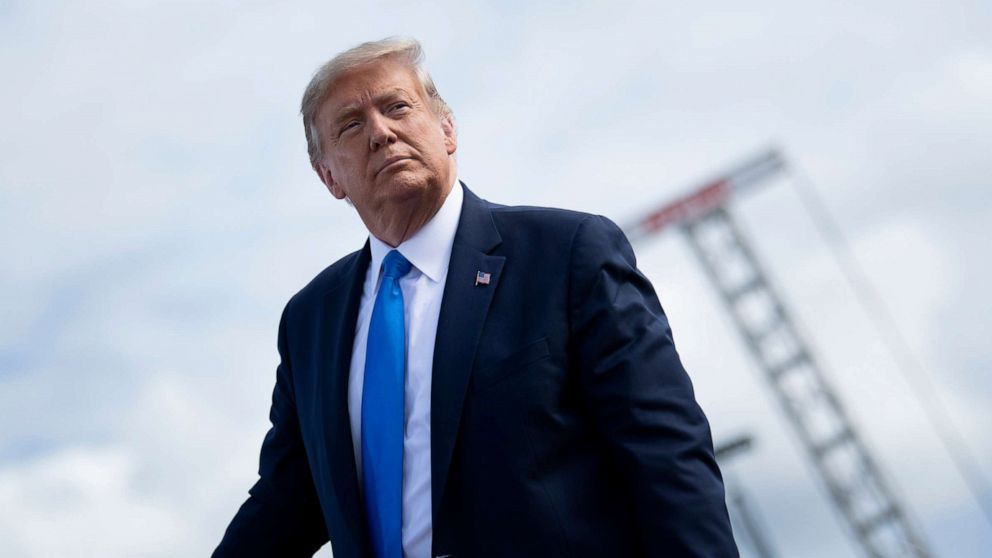 With just 18 days until Election Day, the Democratic National Committee is hitting President Donald Trump over his signature issue, the economy, with the first in a series of memos meant to make the president's "closing argument" for him.

"Put simply, Donald Trump is the worst jobs president in modern history," the memo, distributed by the DNC's War Room, states. "Despite claims that we'd get tired of 'winning,' Trump failed to deliver on his promises and American workers paid the price. He inherited a strong economy and ran it into the ground."

The Democrats argue that as the campaign enters the final stretch -- more than 21 million voters have already cast their ballots -- Trump has repeatedly failed to drive home his final pitch for why he should be reelected to another four years in office. The party says Trump "has a facts problem," so with these memos, they will "highlight these truths Trump can't accept," starting with the issue that has been at the forefront of the president's campaign and one that voters believe he does the best job on, according to polls.

As the nation grapples with an economic downtown caused by the coronavirus, Trump has made the case that he is the candidate to lead the country to its recovery, pointing to the country's pre-pandemic economic boom as evidence.

"Next year, if we don't have somebody that raises taxes and quadruples taxes which they want to do and kills everything, our economy is going to be phenomenal next year... We had the greatest economy in the history of our country," Trump said during a town hall on NBC Thursday night.

The president blamed the country's current economic downturn on the widespread lockdowns that took place at the beginning of the virus outbreak, but he says now things are reopening and the economy is "coming back very fast."

In a statement, a Trump campaign spokesperson called the memo a "disingenuous attack... to score cheap political points."

"In reality, the DNC knows Joe Biden is a lackluster candidate who presided over the slowest economic recovery since the Great Depression, so it's easier to make up false attacks than defend a 50-year record of failure," said Samantha Zager, deputy national press secretary for the Trump campaign. "President Trump built the greatest economy in the world before coronavirus hit and he's already doing it again. Biden and the Democrats are just upset that the President has already achieved in five months what took the Obama-Biden administration over two years."

Thursday marked the 30th straight week of historically high unemployment claims. New jobless claims had remained steady, albeit at a high level, for nearly two months, but this week the number of new claims rose, and there are still more than 25 million Americans currently receiving unemployment benefits under federal and state programs.

The unemployment rate is the highest it's ever been ahead of a presidential election, the memo highlights. While true, at 7.9%, the rate is not significantly higher than what it was going into the 2012 election, when it was 7.8% and voters still reelected former President Barack Obama.

The memo, citing Bureau of Labor Statistics data, says that under Trump's first term, over 160,000 manufacturing jobs were lost, and it homes in how that's impacted key battleground states that the president won in 2016 but that Democrats are hoping to dominate in this cycle.

Recent polling has shown Biden leading by wide margins in Michigan and Pennsylvania, which Hillary Clinton only narrowly lost in 2016. In Wisconsin, polls show Biden up, but not by nearly as much. Polling out of Ohio indicates it's a toss up, but Trump won that state by eight points last cycle.

The memo also tackles how the auto industry has been affected under Trump.

"Trump promised auto manufacturers would move back from overseas -- instead tens of thousands of auto workers lost their jobs on his watch," the memo says.

According to BLS statistics, over 35,000 jobs have been lost in this industry since Trump took office.

Trump is blitzing to battleground states this week, rallying for supporters after the brief hiatus he was forced to take after testing positive for coronavirus and then being hospitalized.

While in Iowa Thursday touting what he says he's done for farmers, he took on China, which he said "targeted" the Midwest state and Americans working in the agriculture industry.

But in their memo, the Democrats say "Trump's trade war wreaked havoc on manufacturers, farmers and consumers," and his trade deal with China isn't what the president chalks it up to be.

"Trump settled for a phase one trade deal with China that failed to address the structural issues that sparked his trade war in the first place, and didn't even undo the damage it caused," the memo states. "Trump has nothing to show for his trade war that inflicted pain on workers, farmers, and consumers."