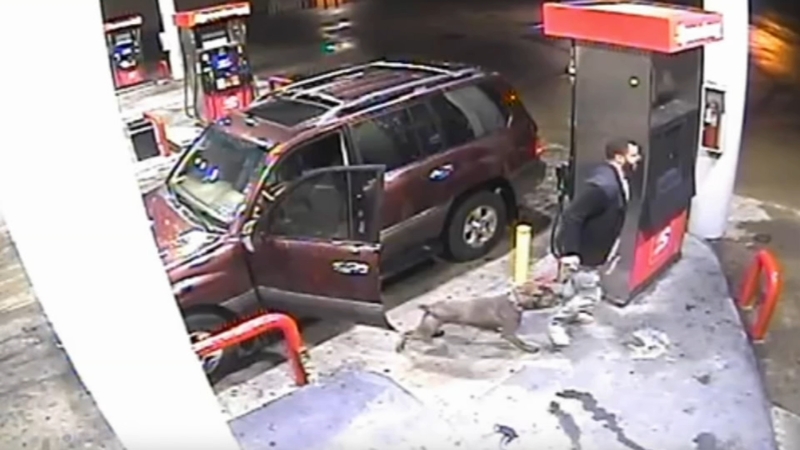 PHILADELPHIA (WPVI) -- Philadelphia police say a suspect ordered his dog to attack a man who was trying to make a few bucks pumping gas. The victim tells Action News he thought he was going to die.

It happened at a gas station located on the 2900 block of North Broad Street around midnight Tuesday.

Police say the suspect and an unidentified woman were involved in an argument when they encountered a 62-year-old man who was trying to make a few extra bucks pumping gas.

That's when police say the suspect told him to leave and ordered his pit bull to attack the man.

Police say the suspect left the victim in the street and fled the scene.

"He didn't like him pumping gas. It's that simple, he did not like him there pumping gas," said Lt. Masai Martin.

The victim is well known to the area around the gas station.

Action News found Buzzhead, whose real name is Lewis Dunston Sr., after he got out of the hospital. He told us his assailant did not want him pumping gas to make a couple dollars.

"He said, 'If you don't get out of here I'm gonna kill you or I'm gonna sic the dog on you,'" Dunston quoted the assailant saying.

Dunston says he tried to walk away but the guy went to his vehicle and ordered his dog to attack him.

"And the next thing you know the dog grabbed my back leg. I thought the dog was gonna kill me," said Dunston. "And the doctor said I was lucky, but that guy needs to be in the hospital somewhere, something wrong with the guy."

Police say all the suspect had to do was say no, pump his own gas and drive off. But instead, he threatened Dunston.

"And then used his dog as a weapon to attack someone," said Lt. Martin.

Police are looking for the suspect driving in a maroon colored Toyota SUV.