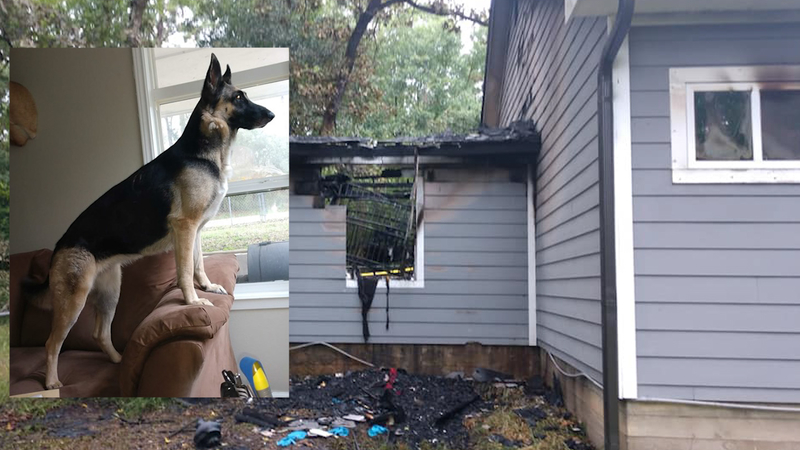 MONTGOMERY COUNTY, Texas -- A deputy constable in Texas was rescued from a house fire thanks to his loving dog.

The charred remains of the home are a reminder for Bryan DuBose of just how bad things could've been for him and his family.

Last week, the Montgomery County Precinct 1 deputy constable and his wife were sleeping when their home caught on fire. The couple only survived because their rescue dog started banging his kennel on the wall.

‘SHE’S THE HERO.’ A Montgomery County Pct. 1 deputy constable said his family was saved by their rescue dog, Xena. Only on @abc13houston at 6pm, hear how the dog saved the family from a fire, and how the community is stepping up. pic.twitter.com/czBU7nQ1vO

DuBose said Xena busted out of her kennel to warn them of the fire.

"She was trying to tell us to get out," DuBose said.

He said his eyes started to burn and he could smell smoke.

"Fire just boiled out," DuBose recalled. "It had been burning for a while."

The fire raged for 30 minutes, and the flames almost took all of their belongings.

Although DuBose has insurance, it won't cover everything.

Community members started an online fundraiser for him, which has already generated nearly $5,000.

"The public outpouring and the people that have contacted us, I couldn't ask for any more of God's grace," DuBose said.

He believes another miracle is the one that entered his life one year ago, when he rescued Xena.

"I went and got her and she weighed like 35 pounds. She just had every bug you could think of, internal parasite and everything," DuBose recalled.

Now, 50 pounds heavier and all of the bugs removed, Xena got the chance to repay her new owner in a way he'll never forget.

"By God's grace," DuBose said. "There's no doubt about that. She returned the favor 10-fold."

Right now, DuBose is staying in a hotel. He's hoping to get an RV and return to his home.