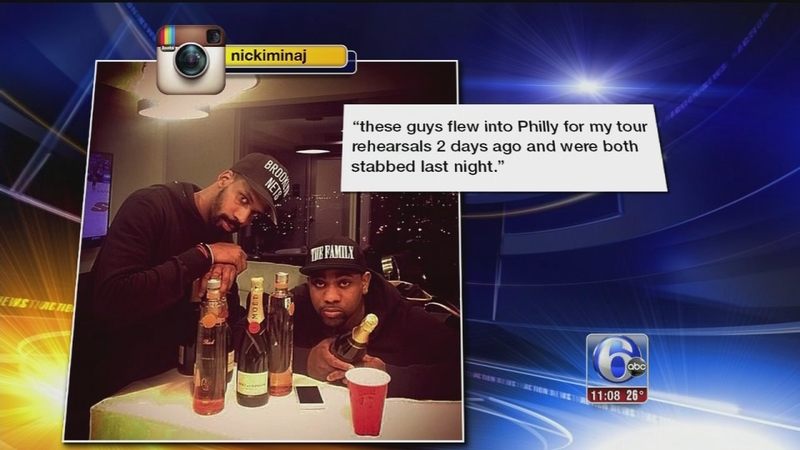 On her verified Twitter account, Minaj confirmed the news, saying, "Two members of my team were stabbed last night in Philly. One was killed. They had only been there for two days rehearsing for the tour."

Two members of my team were stabbed last night in Philly. One was killed. They had only been there for two days rehearsing for the tour.

29-year-old De'Von Pickett, also known as Day Day, was killed. Pickett was from New York. He was working on Minaj's tour.

27-year-old Eric Parker of Philadelphia was critically injured in the attack.

Rapper Fabulous posted a photo of the two men on Instagram on Wednesday afternoon.

According to police, Pickett and Parker went with a group of friends Tuesday night to Che Bar and Grill in the 6300 block of Stenton Avenue in East Mount Airy.

When the bar closed, around 2:30 a.m., the men got into a fight with several other men on the sidewalk just down the street from the bar.

Sources say the fight was over a woman.

"They got into some type of verbal altercation with several other males, which quickly escalated into a physical confrontation. One of those males pulled out a knife and stabbed both of them multiple times," said Philadelphia Police Captain James Clark.

Someone drove the victims to Einstein Medical Center, where Pickett was pronounced dead.

Parker survived but remains in critical condition with multiple stab wounds to his torso.

"The first victim, a 29-year-old male stabbed multiple times in his torso - left side. He was pronounced dead at 2:45 a.m. just within minutes after being transported to the hospital by private auto," Chief Inspector Scott Small said.

Police say the suspect, described as a thin man in his 30s with a full beard, was last seen wearing a black and grey jacket and drove away from the bar in a dark-gold Buick LeSabre.

Investigators were checking for surveillance video on the busy commercial block.

Minaj starts the European leg of her tour in March.

Other performers were taking to social media to comment on Pickett's murder and to wish Parker encouragement in his recovery.

A representative from the bar had no comment on the incident.