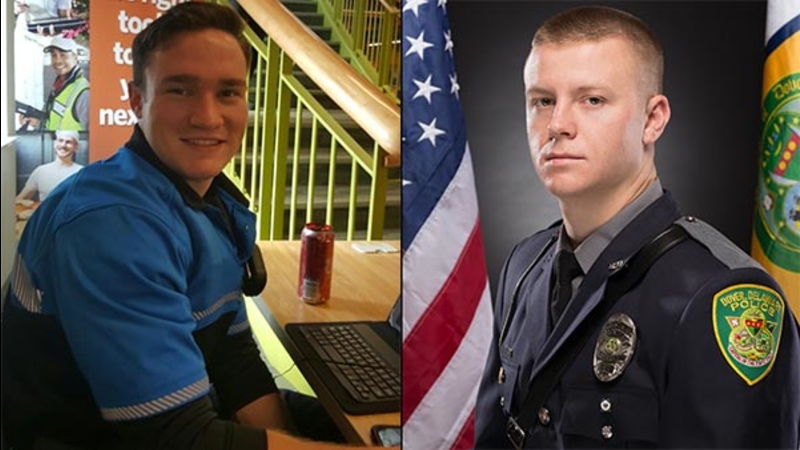 DOVER (WPVI) -- Two members of the Dover Police Department have died after an early morning crash.

They are identified as 23-year-old Patrolman Robert DaFonte, a two-year-veteran of the Dover Police Department, and 22-year-old Cadet James Watts, a six-month member of the Special Enforcement Cadet Unit.

"It is with great sadness and a heavy heart that we announce the tragic loss of two members of the Dover Police Department family. Officer Robert DaFonte and Cadet James Watts were outstanding employees and were committed to serving the citizens of Dover. As we mourn the loss of our fellow officer and cadet, we ask the community to keep their families and the members of the Dover Police Department in your thoughts," Deputy Chief Marvin Mailey said in a statement.

The crash occurred around 4:05 a.m. Sunday at Hazletville and Nault roads in Dover. They were both off-duty at the time.

Police say the Jeep traveled off the road down an embankment and struck a utility pole with the driver's side door.

Watts, who was sitting in the passenger seat, was ejected from the vehicle.

The Jeep came to a stop on the passenger side.

Police say DaFonte was wearing a seatbelt, but Watts was not.

The Collision Reconstruction Unit is continuing their investigation into the fatal crash.

Patrolman DaFonte was a native of Hartley; Cadet Watts was from Camden-Wyoming.