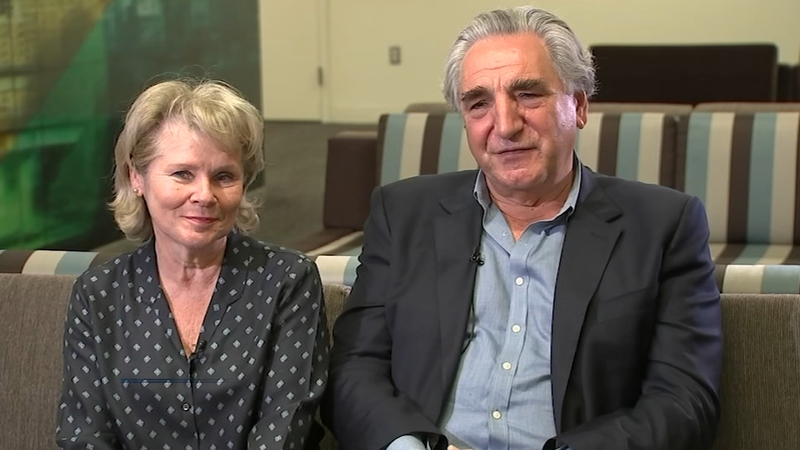 PHILADELPHIA (WPVI) -- It's been four years since fans of "Downton Abbey" said goodbye to the popular six-season TV series.

But now, the grand doors are opening once again as the original cast returns - this time to the big screen.

Two of the stars visited us here in the 6abc studios to talk about the film, which is now in theaters.

"It was great and very familiar at the same," said Jim Carter, who plays the beloved butler, Mr. Carson. "It was like putting on a favorite suit that you've neglected for a little while."

Jim Carter and Imelda Staunton, from Downton Abbey, sit down for an interview with Action News' Alicia Vitarelli.

All of your "Downton Abbey" favorites are back for something big: the King and Queen of England are visiting.

"We are all pulled back to help the house for the royal visit," said Carter.

New to the cast is his real life wife, actress Imelda Staunton.

"I come along with the royal household and I am lady in waiting for the Queen," she said.

That means she's upstairs with the establishment.

"As opposed to being downstairs with the help," she teases her husband.

"Even the theme tune got a round of applause," Carter said of the New York City premiere.

"You never get to see people watch the TV series, they are watching in their own sitting rooms," Carter says. "To see it with a live audience was fabulous. It really brought it to life."

But, they say newbies can just jump right in.

Speaking of fans, it turns out they have a few in the real royal family. Duchess of Cambridge Kate Middleton even visited the set.

"She was supposed to stay for an hour and she stayed for three," Carter says. "She was thrilled to visit and we were delighted to host her."

And about this new character played by Staunton, all we know is her name - Lady Bagshaw.

"I have a history and I have a secret," she says.

"Secrets and scandals go hand in hand," Carter said. "We say no more."