Doylestown fire under control after 3 hours 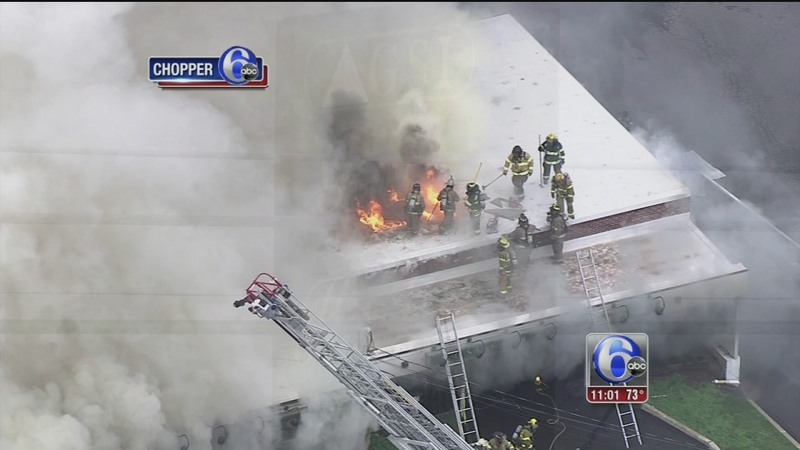 DOYLESTOWN, Pa. (WPVI) -- It took fire crews more than three hours to get a multi-alarm fire at a bath fixture supply store in Doylestown, Bucks County under control.

Thick, white smoke and flames were shooting from the roof of GSI Bath Showplace, a remodeling supply store along the 600 block of North Main Street.

It started just before 5 p.m. Monday as nearby workers were heading home.

"It didn't look like anything at that time. Then, all of a sudden, it exploded," Debbie West of Doylestown said.

For three hours, 150 firefighters worked to douse the flames, at first from inside the building.

But they were driven out by the intense heat and several collapses in the rear of the building.

It's been three hours and the fire is still burning at GSI Bath & Kitchen in Doylestown. Not under control. @6abc pic.twitter.com/oIQeHazIhV

"Because of the construction, even though it's one story here, there are two separate stories below it, which makes for a very difficult situation," said Larry Brown of the Doylestown Fire Department.

"It kept seeming like it would slow down. Then we would see the flames go up again, and everything was going black," a witness said.

Fire officials say kitchen and bath cabinets stocked in the store fueled the fire for hours.

Tanker trucks were called in to help.

"Command decided the pressure was starting to drop on the water system, so they brought in two tanker task forces," Brown said.

Chopper 6 over a strip mall fire in Doylestown, Pa.

It was a major operation that drew dozens of spectators. Some were not surprised that it was taking so long.

"It used to be a hardware store, and now they have the kitchen shop. I'm sure through the years some of the stuff is original. It was a pretty good sized building," Nolan West of Doylestown said.

The store is not open on Mondays, so authorities believe no one was inside.

At least four people were sent to an area hospital. Three firefighters and a bystander suffered heat-related issues.

A PECO worker was also reportedly sent to the hospital. PECO officials would not confirm that report Monday night.