Family of 3 escapes through sunroof, after DUI driver smashes into car flips it on its side, police say 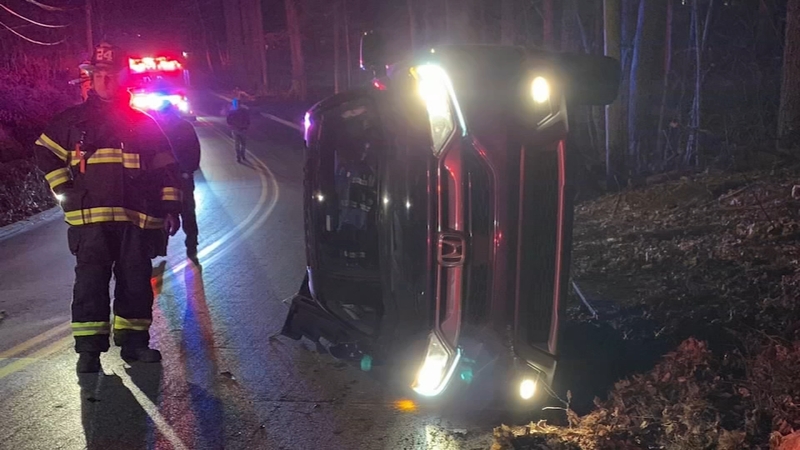 LOWER MERION TWP., Pennsylvania (WPVI) -- A Bala Cynwyd woman said she was driving home from dinner with her family when a drunk driver hit her car on Conshohocken State Road this weekend.

Liz Saadoun said she was driving with her husband and daughter on Conshohocken State Road in Gladwyne, when an alleged drunk driver hit their car around 9 p.m Saturday.

"I just couldn't believe that the car had flipped, and was on its side, it was really scary," said Saadoun.

Her world was turned upside down in seconds.

"I opened my eyes, and literally, I was looking out at the world sideways," said Saadoun, who climbed out of the car with her husband and daughter through the sunroof to escape.

Saadoun is sharing her experience to plead with drivers to think twice before getting behind the wheel.

"Please, especially now, when there's Uber and Lyft, there's so much awareness, just please don't do it," said Saadoun. "It's just not worth it, we were really lucky, but there's so many people just who aren't."

Saadoun said she and her husband are now dealing with emotional trauma, leaving them with sleepless nights and stress even when driving through their neighborhood.

"I had to take my daughter to a friend's, literally it's like six blocks from here, and I was really nervous getting into the car. I was felt like I was hyper-sensitive to every car around me," said Saadoun.

According to PennDOT, 12 percent of all crashes around the holidays in 2017 involved alcohol, and 37 percent of deadly crashes, during holiday weekends, involved drinking.

Charges are pending for the woman who was allegedly driving drunk.