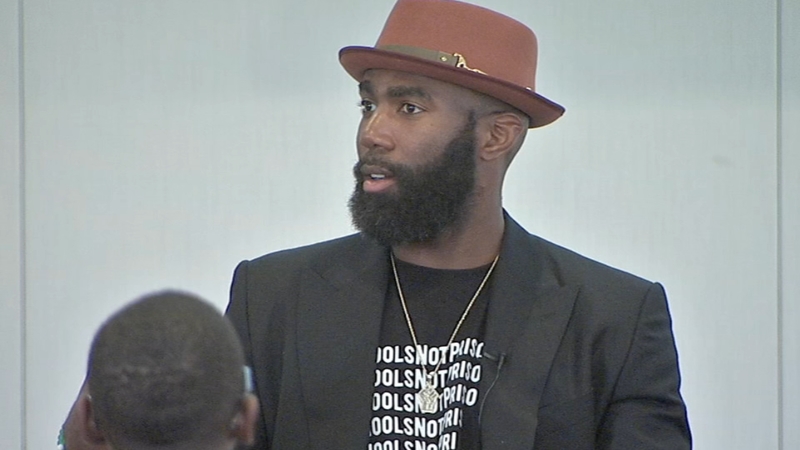 PHILADELPHIA -- Resources from an unprecedented agreement between the Players Coalition and the NFL to address social justice issues are starting to be distributed.

On the day before Thanksgiving, nine people were bailed out of jail in Philadelphia via a $50,000 grant from the Eagles Social Justice Fund, made up of money raised by the players and matched by the team.

Eagles safety Malcolm Jenkins and the Players Coalition followed that up by hosting a services fair on Monday and invited those nine people, to connect them with grassroots organizations that can help them moving forward.

"We recognize that the only reason that these people were in jail is because they couldn't afford to get out. If any of them had the resources I did, they would be out," Jenkins said. "So it's not a matter of public safety or being convicted of a crime, which they haven't yet, it's just they're simply too poor for their freedom."

The Eagles Social Justice Fund has amassed close to $500,000 to date. Per the deal struck between the Players Coalition and the NFL last fall, funds are set up so the players on each team can donate up to $250,000, with the team matching up to that amount.

Other teams, including the Chicago Bears and Tampa Bay Buccaneers, also have started the process of allocating their funds, according to a league source.

The Eagles created a social justice leadership council which includes six players -- Jenkins, Rodney McLeod, Chris Long, Derek Barnett, Nelson Agholor and Michael Bennett -- and five staff members in charge of setting up the structure of the fund and helping with the application process.

"There are teams across the country that I think have really taken this responsibility seriously and said, 'We want to be a part of the solution,'"saidJulie Hirshey, the Eagles' director of community relations. "I know our players in particular, it was really important to them and to (CEO/Chairman) Jeffrey Lurie to be able to say that, 'We want to give a voice to people who don't necessarily have them. We have a voice, how can we lend that?'

"Players really led the way in fundraising and making sure that we got up to that max goal, and then really engaging in learning about the organizations that are impacting our region and making sure that the funds that we were going to give out really went to create an impact."

The Players Coalition was formed by Jenkins and Anquan Boldin in 2017 to create a network for players across the league interested in criminal justice reform. Last fall, the coalition and the NFL reached an $89 million agreement to partner on a plan to address issues in the community.

Cash bail has been a primary focus of the Players Coalition. Surrounded by some of the city's top influencers -- including District Attorney Larry Krasner and Keir Bradford-Grey, chief of the Defender Association of Philadelphia -- Jenkins held a news conference during Monday's event. The Eagles' rookies were in attendance as part of the team's rookie development program, as was receiver Jordan Matthews.

Jenkins explained that their efforts with the nine individuals whose bail was posted can be used as "an example of success" that demonstrates "if you pour into and invest in people, they are less likely to commit an offense, they are more likely to sustain and become contributing citizens."

Members of the coalition have attended bail hearings and met with experts in this field over the last year-plus to educate themselves on cash bail and mass incarceration -- which Krasner calls "the civil rights issue of our time" -- to figure out how to best use their platform to effect change.

"At 57 years of age, I remember there being good activity in society by athletes, but I cannot think of a stronger, more serious effort on the part of athletes to bring about social justice," Krasner said of the Players Coalition. "I think it is wonderful that these players are stepping up, that the teams are stepping up, and I think it reflects an understanding on the part of the public that the sacrifice these players are making and these teams are making is for them."

The agreement between the NFL and Players Coalition did not include language calling for players to end protests during the national anthem in exchange for funds. But the NFL was hopeful the effort would effectively end the movement that quarterback Colin Kaepernick started in 2016, when he refused to stand for the anthem. Some players, including Eric Reid, broke from the coalition right before the deal was struck, unhappy with how Jenkins and Boldin handled the negotiations.

On Monday, Jenkins explained why he felt it was important to partner with the league.

"To have that support and backing is something that we wanted to do because now it can be replicated in every market. Every NFL market has an opportunity to get to know their local grassroots organizations, get to figure out what the issues are, and decide as players where they want those funds to go, to be able to interact and have impact in a way that we could never do in silos as individual players," he said.

"I don't know if I saw exactly where it was going, but I know what we wanted to be able to do was not only just draw attention to the problems but we wanted to become part of the solution. We know that can't be done just on our backs alone, that there are people who do this work day in, day out, that they need support, they need eyeballs, they need cameras, they need to be heard, they need resources, all of those things we have the ability to pour and bring in. I think this has gone probably way further than I ever thought when we first started."