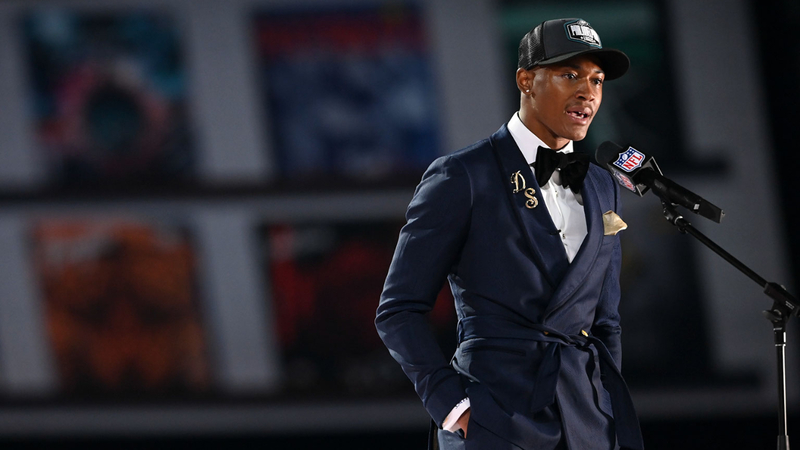 PHILADELPHIA (WPVI) -- While the parties looked slightly different this year, Philadelphia Eagles fans were out celebrating the highly-anticipated NFL Draft on Thursday night.

The Eagles selected Heisman Trophy winner DeVonta Smith after trading up two spots to No. 10 in the first round of the draft.

The Alabama wide receiver reunites with former teammate Jalen Hurts, who replaced Carson Wentz at quarterback for the Eagles last season. Smith had 117 catches for 1,856 yards and 20 touchdowns as a senior. He was the first receiver to win the Heisman in 29 years.

Those on social media didn't hold back their excitement either.

What do you think of the Eagles Drafting DeVonta Smith?

Oh I am all the way in on DeVonta pic.twitter.com/yO7nbKCdef

The NFL Draft coverage was on the big screen inside Sports and Social at the Live! casino.

Fans know what's at stake for the first night of the draft.

"The Eagles have a history of misfires in the first round. Did I touch a nerve? I actually stormed out of the room last year, I was pretty upset," said Matthew Biddle.

The Eagles selected wide receiver Jalen Reagor in the first round last year, one pick ahead of wideout Justin Jefferson. They haven't had a 1,000-yard receiver since Jeremy Maclin in 2014.

Season ticket holders back at the Linc for night one of the #NFLDraft2021 https://t.co/7ihW9o6oPT pic.twitter.com/iviCNio0hZ

New head coach Nick Sirianni is a former receivers coach. He took over after Doug Pederson was fired three years after winning a Super Bowl.

"What I saw in DeVonta was just a guy who can consistently win one-on-one. It's a little different with how he does it. He does it with speed, quickness. He does it at the top of the route, beginning of the route, off the line of scrimmage," Sirianni said. "But I consistently saw him win one-on-one versus some of those top corners in the SEC, and when you have a guy like that in your offense that can do that, it makes everybody else around him better."

Thursday night season ticket holders funneled into the Lincoln Financial Field, and the mood was one of excitement and hope.

Over in Fishtown, Birds fans watched a live podcast of "Inside the Birds" at the Evil Genius Beer Company -- a watch party of sorts -- which looks a little different from years past: plexiglass, socially distanced tables, but the same big-screen televisions.

"It's nice. I'm happy that we can all show up," said Sean O'Donnell.

To move up, the Eagles gave Dallas the 12th pick in the first round and a third-round pick (No. 84) they received from Indianapolis in the trade that sent Wentz to the Colts.

Philadelphia originally had the sixth pick but they traded that to Miami last month and gained an extra first-round pick in 2022.