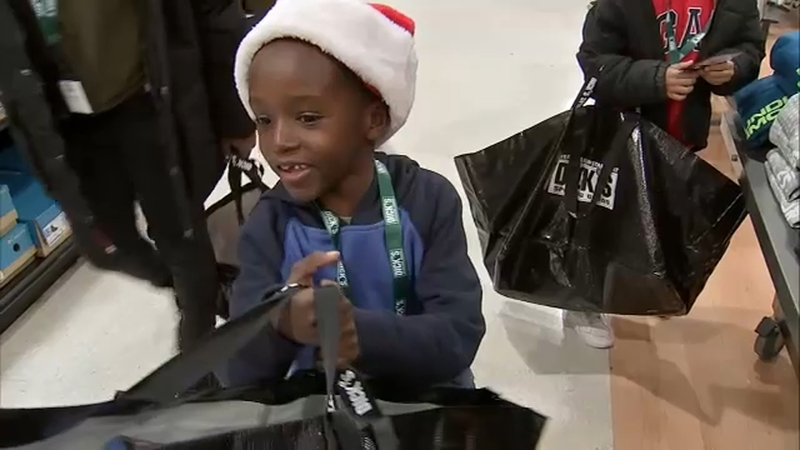 CHERRY HILL, New Jersey (WPVI) -- The Philadelphia Eagles are coming off a big win against the Redskins and they're facing an even bigger game against Dallas on Sunday, but Monday night a few of the players put football aside to make sure some of their younger fans have a Christmas to remember.

The kids were absolutely thrilled when Eagles linebacker Nigel Bradham and defensive end Derek Barnett walked into Dick's Sporting Goods in Cherry Hill, New Jersey to take them on a shopping spree.

"Thank you!!" yelled the group of kids.

The underprivileged kids from Northern Children's Services in Philadelphia wasted no time going through the store picking and choosing items they wanted.

"I have two hats, shirts," said a delighted Hassi Miles-Johnson, a six-year-old from North Philadelphia.

Kelvin Johnson was thrilled to see his five kids having a ball.

"Just to see them running around the store as a result of the Eagles and players and stuff like that, to have a bag and say 'just put whatever you want in there,' I'm a little jealous," he said.

"I have two shoes, I have one blanket, I also have a clip for an Eagles Helmet," said ten-year-old Jesus Johnson.

And to see the smiles on these kids' faces was priceless.