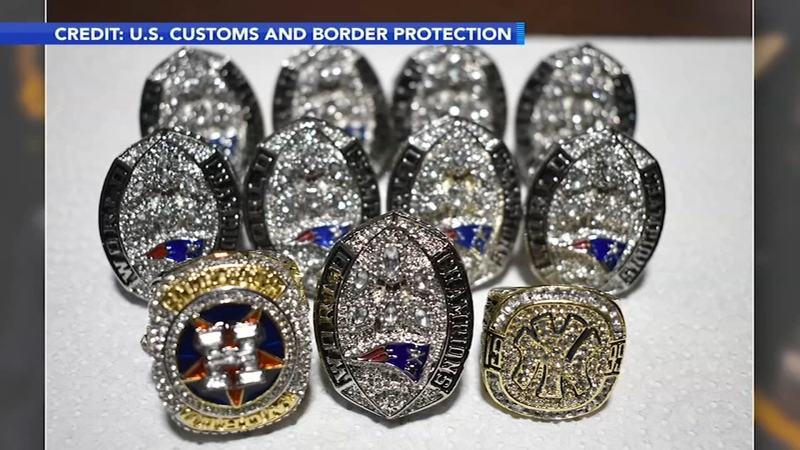 As you can imagine, U.S. Customs agents at Philadelphia International Airport inspect a lot of packages coming into the country.

One such item was a box coming in from China destined for Drexel Hill with a declared value of $14. Suspicious agents opened it up.

"They looked inside and saw 11 championship rings; we kind of saw by their quality they may be suspected counterfeit," said Steve Sapp of U.S. Customs and Border Protection.

Agents verified through league and team trademark holders that the rings were fake.

So someone could have been out a lot of money if they bought one of these rings thinking they were real.

No one was arrested, but agents sent a letter asking the sender to provide proof the items are authentic.

Sapp said, "Generally what happens is, you give them the option to dispute it, or abandon it. So in most cases, they'll abandon it."

If it turns out to be a Patriots fan who sent the fake rings, that's one blow right before the big game. Agents are hoping the Eagles deliver a second blow on Sunday.

"We're kind of hitting back at them twice right now, one in these seizures and the second one with Sunday's game, hopefully," said Sapp.

All jokes aside, agents are taking this seriously and say the seizure plays a role in the overall picture of protecting the national economy.

"It's a shame because you see a lot of people who try to take advantage of sports fans who try to sell a lot of memorabilia, maybe pass it off as authentic and in reality, people are paying money for something that's not real," said Sapp.