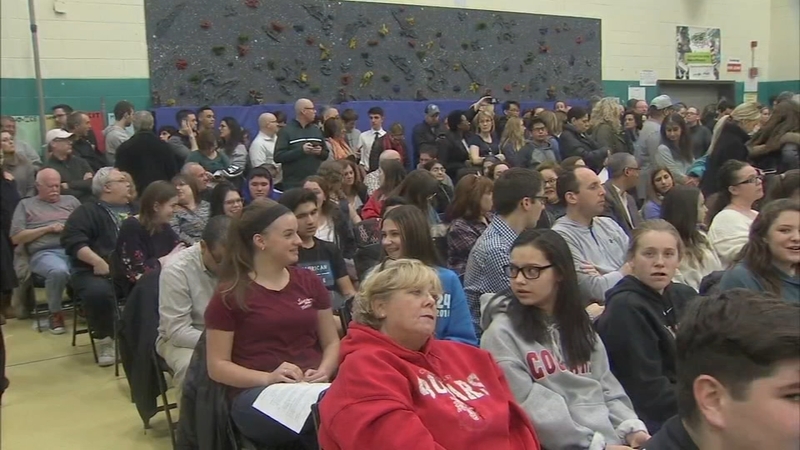 Chaos erupted almost immediately after School Board President Barry Dickinson announced that by law the board is not allowed to speak about personnel matters. Dickenson also said that nothing he has seen in the public domain is based on fact.

"Everything related to this matter is conjecture," Dickinson told the standing room only crowd.

The meeting came on the heels of a massive student walk-out at the high school, staged in protest of the suspension of History Teacher Timothy Locke.

Chopper 6 hovered overhead as hundreds of Cherry Hill High School East students left class Tuesday morning, circled the school track, then marched out and around the boundaries of school property.

Watch video from Chopper 6 as students stage a walkout and protest march at Cherry Hill East on February 27, 2018.

It was a strong response to the suspension of a beloved history teacher who voiced concerns last week about the lack of school security in the wake of the Florida massacre.

"He brought up a real problem about how our school security lacks," said senior Ben Schore.

Schore organized Tuesday's protest in support of Timothy Locke, an Iraq War veteran. The 59-year-old teacher was placed on leave after his comments upset a student.

Tenth grader Molly Phillips was in class that day.

"I don't even know who it was, personally," said Phillips. "But it wasn't right, because what he was doing was (trying) to protect her not to hurt her."

"I feel like the school is not safe, and what happened in Parkland can happen to anybody," said junior Harris Satterthwaite. "And Mr. Locke, he was just trying to voice his opinion, and he was treated unfairly."

"He was bringing up current security issues at East and talking about the lack of safety here," said junior Taryn Runell.

Other students pointed out that the discussion Locke was having was a valid one, not only in fact but in principle.

"If we don't have the right to talk about the controversial issue in our school system, then how are we going to move forward as a society, let alone a school system?" said senior Adam Kriesman.

Students told Action News that there are four security guards at Cherry Hill High School East, but none are armed.

Calls to the superintendent and the school district Tuesday morning went unreturned.

But at a school meeting Monday night, the school principal, Dennis Perry, threatened to suspend students who attended the walkout. Tuesday morning, that only applied to students who walked off of school property.

Parents and others driving by the protest made sure the students knew they could count on their support.

"This is what democracy looks like," said Pamela Barroway of Cherry Hill. "It's awesome. I think it's a bright future, I think it's really hopeful. It makes me hopeful."

As for why he decided to come out, parent Eric Satterthwaite said, "In support, solidarity... my son with the students. It's all about activism. I think we need more of that now."

Locke, who was unavailable for comment on Monday, is a 59-year-old Iraq War Veteran who served in the Air Force.

The school district superintendent has declined to discuss the situation. Meanwhile, the matter does not appear to be going away.

"A lot of what the school here is doing is trying to shut out what happened in Florida, instead of saying 'This is what we have to do, this is what we're going to do next, how we can fix what we are doing,'" said sophomore Debbie Goldberg.

Some students are signing petitions to bring Locke back.

"Mr. Locke, if you're watching, we got your back," said senior Justin Prechodko.

The district has not said how many students were involved in the protest, but the threat of sanctions for those involved appeared to be lifted late Tuesday.

In a letter, the principal said: "I am formally retracting the statement that I made on Monday, February 26 regarding withholding participation in the senior trip, the senior prom or graduation."