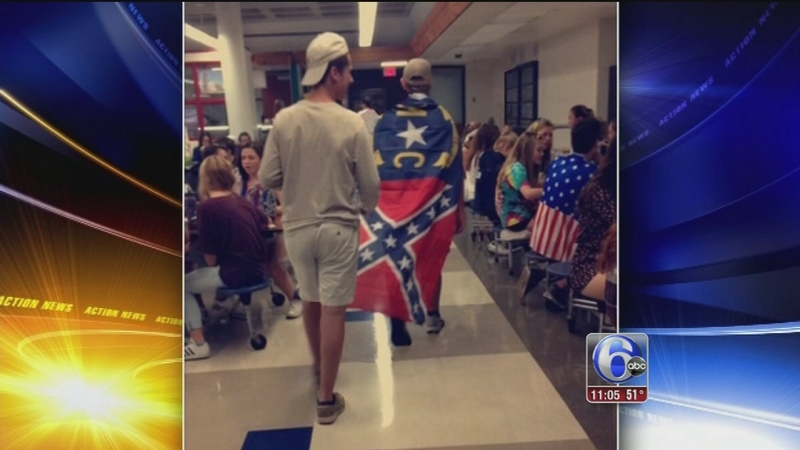 However, concerns linger for some parents following the meeting which the media was not allowed to attend.

Update on why weren't allowed into community meeting. We were told they wanted parents to be able to speak freely in mtg.

"I'm satisfied that the school board wants to hear from everyone and is genuinely concerned. There needs to be action communicated," parent Jennifer Adcock said.

Photos show several acts of vandalism and harassment at Council Rock North in Newtown, Pa. in the wake of the presidential election.

But Robyn Johnson, whose daughter attends Council Rock North, says there were other incidents that predate the election.

Johnson says her daughter took a photo back in September of a classmate with a flag, including the confederate banner, draped around his shoulders inside the school.

She says it seems to be developing into a disturbing trend.

Over the past several days, students have reported other hate-filled messages directed at Latinos in the gay community, festooned with swastikas, inside bathroom stalls.

One Latina student even reported finding a note in her backpack telling her to go back to Mexico.

We spoke with a few Council Rock North students earlier in the day who say they are saddened, but not surprised.

"It's not the first time people have written inappropriate things on the bathroom walls," said Justin Ross.
"There's always going to be someone who is not with the norm, and it's not the norm that they're acting like this. So, I think we need to get past that," said Rachel Daniel.

The district also plans to have hallways, bathrooms and cafeteria's closely monitored.

"I think it's a start and it probably should have started many years ago," parent Holly Olson said.

All this comes in the wake of threatening messages targeting African-American freshman at the University Pennsylvania.

Those messages have now been linked to three people in Oklahoma, including a student at the University of Oklahoma, who has since been suspended from the school.

Robyn Johnson says, in dealing with these situations involving young people, moms and dads need to be a part of it.

"You have to get parents involved, you have to get the community involved, and together we can start the healing process," she said.
Related topics:
educationnewtown boroughpennsylvania newspa. newsvandalism
Copyright © 2021 WPVI-TV. All Rights Reserved.
More Videos
From CNN Newsource affiliates
TOP STORIES