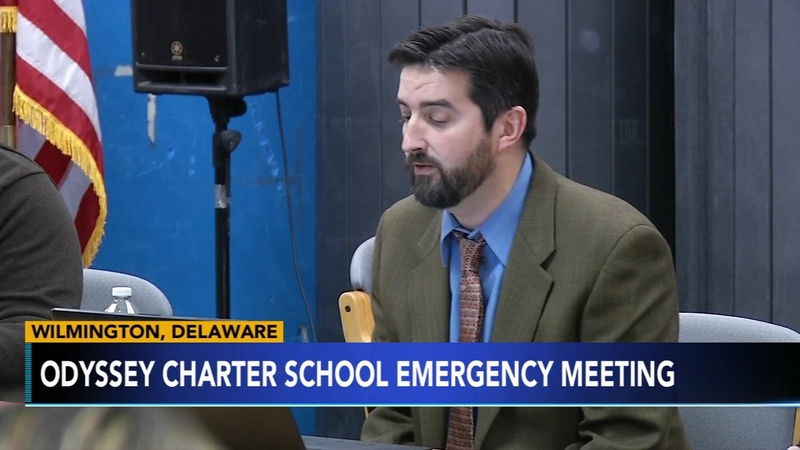 WILMINGTON, Delaware (WPVI) -- The president of the board of directors of a Wilmington charter school resigned Sunday night during an emergency meeting following controversial comments made by a board member.

Earlier this week, Secretary of Education Susan Bunting placed Odyssey Charter School under review, triggering an investigative process to determine whether the school violated its charter and the probationary conditions of its charter renewal.

The move came after members of the Odyssey board of directors allegedly made jokes regarding a neighboring dual-language charter school with a mostly Hispanic student population at a January meeting.

Odyssey, a Greek-themed school, sits next to Academia Antonia Alonso on property that was once a DuPont Co. office site in Wilmington.

During a recorded discussion about potential parking restrictions, an Odyssey board member noted that he had told school administrators "somewhat in jest" to erect a fence, the News-Journal reported.

Laughter ensued as another person said, "build the wall," according to the newspaper, which reported that a board member tried to steer the conversation back on track before noting "the jokes write themselves."

The Delaware Department of Education said Bunting condemned the "discriminatory statements" that Odyssey board members were accused of making about Academia Antonia Alonso Charter School.

On Sunday, Board President Josiah Wolcott announced he was stepping down as board president of Odyssey Charter School.

Wolcott had previously called for the resignation of member Michael Klezaras, who reportedly stepped down last week.

The state is now looking into whether the incident has violated the terms of the school's charter.

After a Charter School Accountability Committee hearing on Odyssey's finances and governance practices, state officials placed the school on probation last summer until June 30 of this year and directed that it recover more than $93,000 in misappropriated funds.

State officials had earlier expressed concerns about the influence that the American Hellenic Educational Progressive Association has exercised over Odyssey. They also questioned Odyssey's use of funds to start an early learning center.

Odyssey's charter required that five of its nine board members be appointed by AHEPA, a Greek-American fraternal group.

As part of its probation, Odyssey was directed to revise its bylaws so that, as of Jan. 1 of this year, the majority of its board members were not members of AHEPA organizations. State officials also required that nominations for future openings on non-AHEPA board seats be done only by a committee consisting only of non-AHEPA board members.