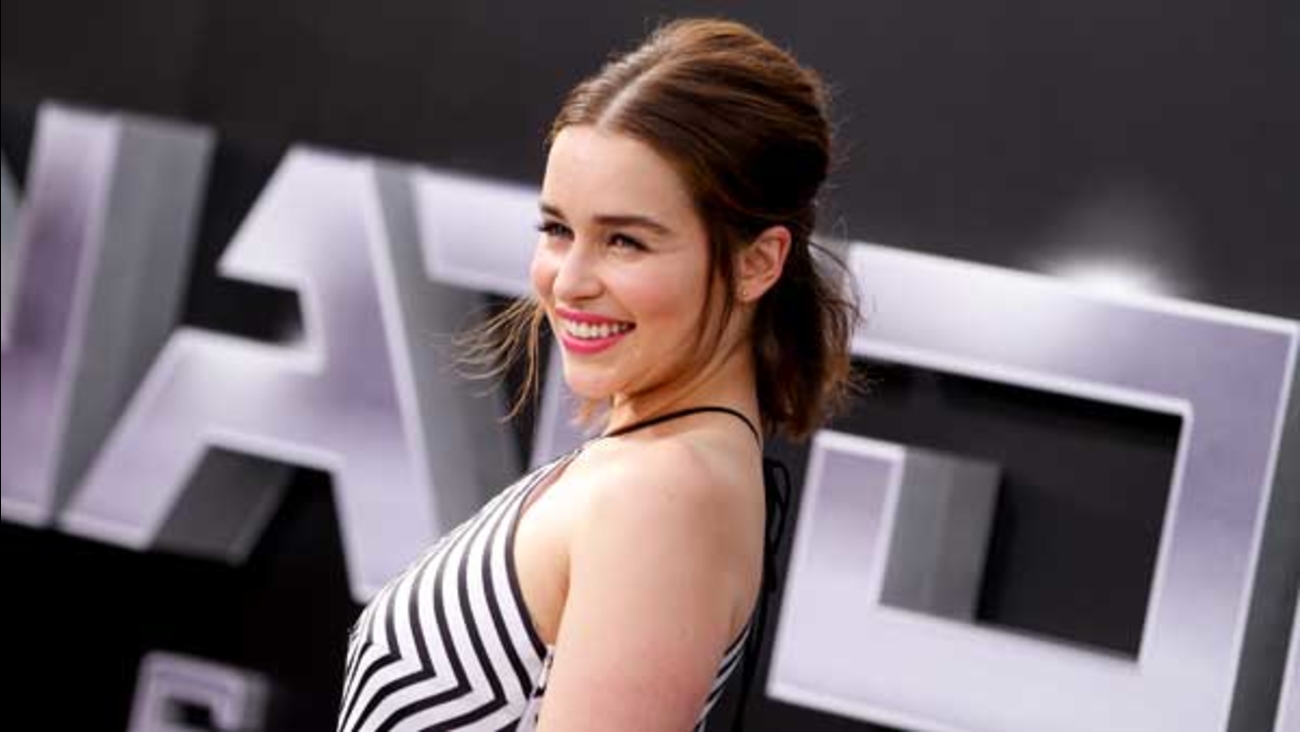 Emilia Clarke arrives at the LA Premiere of "Terminator Genisys" at the Dolby Theatre on Sunday, June 28, 2015, in Los Angeles. (Photo by Rich Fury/Invision/AP)

The 28-year-old Londoner, who plays menacing, white-haired Daenerys Targaryen, aka Khaleesi, aka Mother of Dragons on "Game of Thrones," is Esquire's Sexiest Woman Alive.

The magazine made the announcement early Tuesday, but GQ got there first, anointing Clarke Woman of the Year in September.

In addition to her high-profile role on the massively popular HBO series, Clarke was Sarah Connor in the summer movie hit "Terminator: Genisys."

She can do fierce, but also friendly. She can be queen, but also kid sister, killer or girl next door, writes Benjamin Markovits in the Esquire story accompanying Clarke's nude cover, belly down with bedsheet strategically placed.

"Emilia Clarke is unforgettable in 'Game of Thrones' and was hands down the number one choice of Esquire's staff, friends and family," she said in an email.

On the pages of Esquire, with more sultry photos inside, she is also "Lilly," the alias she takes after donning a disguise to frolic at London's Crystal Palace Park with Markovits for a round of "Game of Phones," a group treasure hunt thought up by a social networking company and intended to help people make new friends in a new city.

Clarke is the second child of by-the-bootstraps parents. Mom started as a secretary and rose to marketing executive and dad made it out of working-class Wolverhampton near Birmingham to become roadie, then sound specialist for big-budget musicals.

She followed her brother into boarding school because "I fancied his friends," she told Esquire, then she went on to study drama in college, pulling a couple of episodes on the long-running British daytime soap "Doctors" after graduation. She worked multiple jobs while living with friends before "Game of Thrones" changed her life when it began airing in 2011.

Clarke recalled some difficulties on the show early on. She was just 23. There was full frontal nudity, lots of sex, even a rape scene. She tells Markovits how she suffered along with her character.

That's what the English call "mucking in," or striking a balance between helping out and getting your hands dirty while maintaining a smile on your face, Markovits writes. Clarke, he said, is good at it.

She recalled in the story her father's early warnings about lowering expectations as an actress when she first started out, and her days working at a call center.