Next 'Star Wars' film to use unreleased Fisher footage 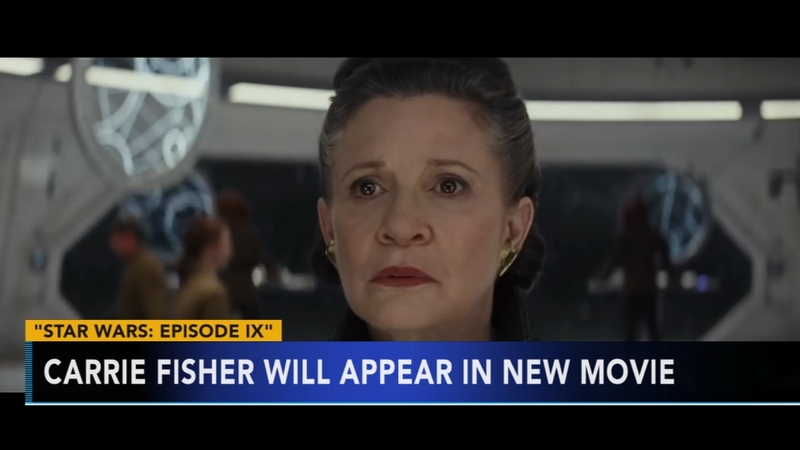 Carrie Fisher to make appearance in next Star Wars film

LOS ANGELES -- Carrie Fisher is not done with "Star Wars" after all - Lucasfilm says unreleased footage of the actress will be used in the next installment of the "Star Wars" saga to draw her character's story to an end.

The studio and writer-director J.J. Abrams announced Friday that footage of Fisher shot for 2015's "Star Wars: The Force Awakens" will be used in the ninth film in the space opera's core trilogies about the Skywalker family that includes Fisher's character, Leia.

Filming is scheduled to begin Wednesday at London's Pinewood Studios.

Mark Hamill, who plays Luke Skywalker, will also appear in the film, which for the moment is simply called "Episode IX." It is scheduled to be released in December 2019.

Fisher died in December 2016 after she finished work on the middle installment in the trilogy, "The Last Jedi." Director Rian Johnson opted not alter her storyline, leaving Leia's fate to be handled by Abrams.

"We desperately loved Carrie Fisher," Abrams said in a statement. "Finding a truly satisfying conclusion to the Skywalker saga without her eluded us."

He said recasting Fisher or recreating her using computer graphics, as was done in a spinoff film "Rogue One," was not an option.

"With the support and blessing from her daughter, Billie, we have found a way to honor Carrie's legacy and role as Leia in Episode IX by using unseen footage we shot together in Episode VII."

Friday's announcement also confirmed that Billy Dee Williams will be returning to the franchise as Lando Calrissian, a hero of the rebellion who hasn't been seen in the latest trilogy.

Also returning to the film are Daisy Ridley, Oscar Isaac, John Boyega and Kelly Marie Tran, who all play heroes.

Adam Driver and Domhnall Gleeson, who play villains in the latest films, are also returning.