A look at MTV Movie Awards' most memorable moments

LOS ANGELES -- It wouldn't really be an MTV award show without a bit of booty, now would it?

Despite being peppered with accolades for the serious teen drama "The Fault in Our Stars" and its thoughtful star Shailene Woodley, the MTV Movie Awards still managed to provide several moments of silliness Sunday, including a rump-shaking Channing Tatum and a scantily clad Rebel Wilson. As always, the prizes were secondary to the irreverence.


Here's the most memorable moments from the cable network's 24th annual celebration of movies:

After the hunky cast of "Magic Mike XXL" presented Jennifer Lopez with a trophy for her "scared-as-(expletive)" performance in the thriller "The Boy Next Door," the "American Idol" judge prodded the guys to show off their dance moves. Without missing a beat, Tatum turned his backside to the crowd and gyrated his gluteus maximus for Lopez. Unfortunately, his co-stars Joe Manganiello, Matt Bomer and Adam Rodriguez, not Lopez, joined in. "Maybe next time," she teased.

Robert Downey Jr. was enthusiastically presented with the Generation Award, the show's take on a lifetime achievement honor, by his fellow cast mates from "The Avengers." Downey's poignant acceptance speech, in which he recalled his struggles with drug addiction, was perhaps overshadowed by his awesome entrance. The star of the "Iron Man" movies emerged on the cartoon-themed stage from inside what he called a "massive, trippy cat head."

The unlikely trio of Charli XCX, Ty Dolla $ign and Tinashe managed to drag in the show's most energetic routine with their fresh pop-rap collaboration "Drop That Kitty." From behind an oversized inflatable guitar, Charli kicked off the performance backed by her all-girl band on "Famous" before she was joined for "Drop That Kitty" by Ty, Tinashe and a chorus line of female dancers clad in tight pink jumpsuits and cat-inspired 'dos. The new ditty had the Nokia Theatre crowd purring.

Rebel Wilson, who hosted the MTV Movie Awards in 2013, turned heads at this year's extravaganza when she joined her "Pitch Perfect" co-stars onstage dressed as a Victoria's Secret model - wings and all - to introduce a clip from their a capella comedy sequel. The funny lady wasn't done showing off the goods. Wilson not-so-accidently dropped the winner envelope on the stage, prompting her to jokingly bend over and expose the word "THINK" scrawled across her form-fitting pants.

The usually goofy Kevin Hart showed off his fraternal side as he received the comedic genius award. The "Ride Along" funnyman was joined onstage by his children, daughter Heaven and son Hendrix. Hendrix clutched his dad's golden popcorn bucket trophy as Hart accepted the accolade, even though the tyke could barely lift it. Afterward, the Hart boys showed off a signature handshake that culminated with the duo cutely prancing around each other, drawing giggles from the audience. 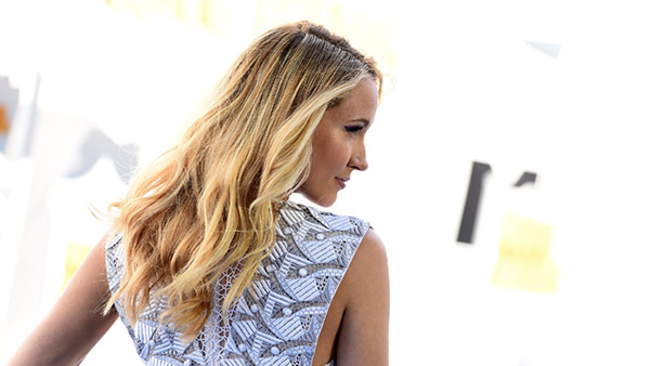