'Beyond the realm of imagination:' Oscars nominees react to their nomination 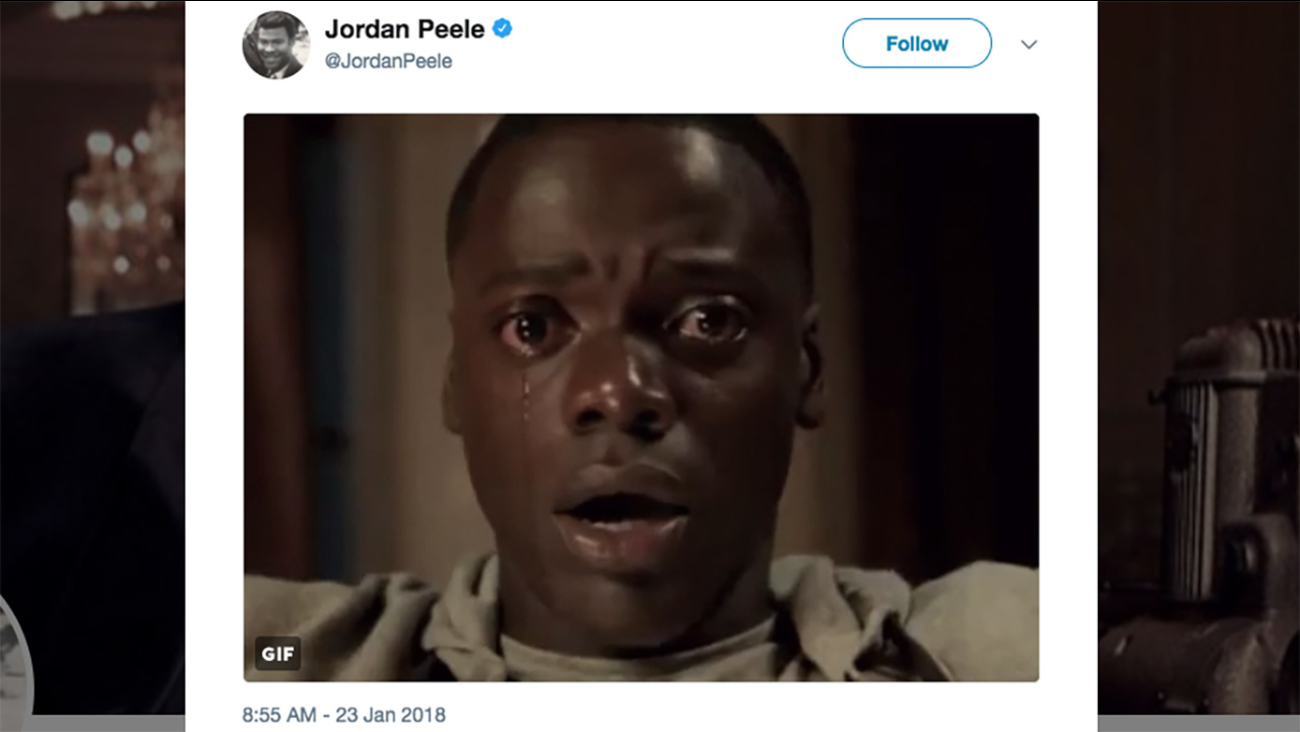 Jordan Peele reacts on Twitter with a GIF after being nominated for an Academy Award. (Jordan Peele/Twitter, Screenshot)

It's not every day that you get nominated for an Academy Award! See how this year's nominees reacted to learning they're up for one of Hollywood's most prestigious awards:

"It is a great honor and joy to be here, today with a picture that remains faithful to all my convictions and the images I have loved since infancy. I want to thank the Academy and my professional colleagues for their kind disposition towards "The Shape of Water." I share these nominations with all the young filmmakers in Mexico and Latin America who put their hopes in our craft and the intimate stories of their imagination..."

Thank You to the academy and my peers for this moment of joy in a 25 year journey as a storyteller. pic.twitter.com/vDOTfs0CiX

"Firstly, I want to congratulate my fellow nominees, both in the acting categories and across the board. To be in such company is deeply, genuinely, humbling. To have the chance to play an iconic leader like Winston Churchill at this point in my career, was the opportunity of a lifetime and I am so happy that my colleagues and partners on this wonderful film have also been honored with nominations. I am overjoyed to be nominated, and proud to be part of this wonderful thing known as movie making!"

What?? This is beyond the realm of imagination. It means so much that the @TheAcademy deemed #DearBasketball worthy of contention. Thanks to the genius of @GlenKeanePrd & John Williams for taking my poem to this level. It's an honor to be on this team. #OscarNoms pic.twitter.com/M2joyk9D1V

Sally Hawkins (Best Actress in a Leading Role, "The Shape of Water")

"This nomination is for every single one of us who brought our hearts to this film.

I am here because of the greatness of others. I stand on the shoulders of giants. Guillermo handed me a gift with this role, this film.

I am so delighted for us all.

To be honoured by the acknowledgment of my colleagues of fellow actors, filmmakers, writers, crew members is truly humbling.

It is a privilege to tell such stories and to be able to make films that show there is a life beyond the life that people know - one that is not always seen.

To be considered in this category along side these exceptional women is a real honour and gift in itself.

"I'm thrilled that our film has received seven nominations from the Academy, and that the beautiful work of our editor Jon Gregory, our composer Carter Burwell, my gentle brothers-in-arms Woody Harrelson and Sam Rockwell, and our fearless leader Frances McDormand, have all been recognised so wonderfully. I can't wait to celebrate with them all come March 4th."

Very stoked to have @Guardians Vol. 2 nominated for an #Oscar. Many thanks to the THOUSANDS of artists from numerous vendors who helped us create this magical world. pic.twitter.com/bS9O53271Q

I just spoke to Daniel. You know when you’re on the phone trying to disguise the sound of an ugly cry? I failed at that.

Right now I’m just thinking about everyone who bought a ticket and told someone else to. You did this. Thank you. ✊🏾

Meryl Streep (Best Actress in a Leading Role, "The Post")

"I am honored beyond measure by this nomination for a film I love, a film that stands in defense of press freedom, and inclusion of women's voices in the movement of history- Proud of the film, and all her filmmakers. Thank you from a full heart."

Richard Jenkins (Best Actor in a Supporting Role, "The Shape of Water")

"I'm so excited and thrilled by the nomination and for "The Shape of Water" team lead by Guillermo the Great. It is rare and humbling to be part of something so special."

"I'm very happy to be recognized by the Academy for my role in Sean Baker's "The Florida Project." I am very proud of this movie that authentically expresses the human spirit's natural impulse to extend itself to others even in difficult circumstances."

Christopher Plummer (Best Actor in a Supporting Role, "All the Money in the World")

"I am absolutely thrilled to have received this nomination by the Academy. It was quite unexpected but incredibly gratifying. Everything has happened so quickly of late that I am still a trifled stunned but excited by it all."

Click here for the full list of nominees and don't miss the Oscars on ABC on March 4.