Celebrities, musicians react to the death of Prince 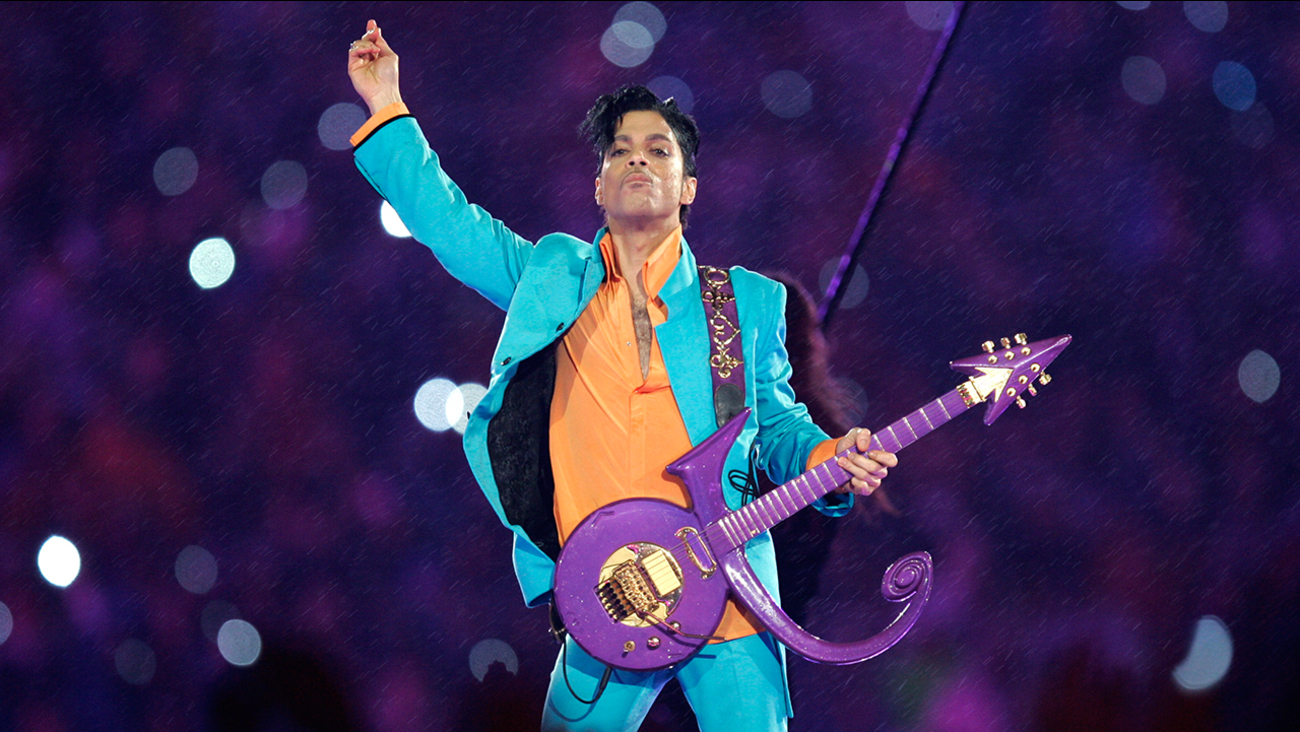 Prince performs during the halftime show at the Super Bowl XLI football game at Dolphin Stadium in Miami on Sunday, Feb. 4, 2007. (Chris O'Meara/AP)

Music icon Prince died at the age of 57 on Thursday, April 21, 2016. Musicians and notable figures shared their grief on social media after hearing of his death.

I LOVED him, the world LOVED him. Now he's at peace with his Father. Rest in power, @prince, my brother. pic.twitter.com/ZN6cc3WWuF

And just like that...the world lost a lot of magic ✨ Rest in peace Prince! Thanks for giving us so much...

"Nobody's spirit was stronger, bolder, or more creative." —The President and First Lady on the passing of @Prince. pic.twitter.com/4XnpGBrxMV

"Dearly beloved
We are gathered here today
2 get through this thing called Life..."
-Prince

I can’t believe it, I’m in total shock. So many wonderful memories,
I will miss him. #Prince

My heart is broken. Prince man. One of the greatest. This one hurts like MJ.

Once, Prince yelled from the stage that I could dance. He was likely yelling to the girl behind me, but it's still my happiest moment. RIP.

Numb. Stunned. This can't be real.

I loved this Man. Too soon. Can't comprehend it but it's unfortunately true. Heaven is yours. RIP #Prince #RIPPrince pic.twitter.com/EH8paEvn75

Prince the doves really are crying now. Listening to your music. Remembering you. #RIPPrince

Say it isn't so. pic.twitter.com/xdY0bYDtSO

For Minneapolis, the loss of Prince is too large to describe. Certainly in 140 characters. Please read: https://t.co/3s7M2jEqt9 #PrinceRIP

Shocked and saddened to hear the news about Prince. The music world will miss his prolific genius.

Sad beyond words that Prince is gone. To me he was one of the greatest music heroes - a true genius. There will never be another Prince.

Unbelievable just heard about PRINCE. Strength and light to his family/loved ones. One of my favs and a true pioneering artist. RIP brotha.

My musical brother... My friend... The one who showed me the possibilities within myself,… https://t.co/UumElgEgFg

Oh no. No no no. Not another! So sad. Rest in peace Prince.

Once again Heaven's band just got even more incredible. One of my absolute idols #Prince. Thank u for showing me what true GREATNESS is!!

This is what it sounds like #whendovescry #rip #Prince

RIP to @prince…a true artist in every sense of the word. Gone way too soon.

(A silent world. Completely void of sound) This is what it sounds like, when doves cry. #PRINCE

He was a true legend and a musical genius! Prince could play every instrument with style and grace.

This is so heartbreaking💔 I had this Prince pic drawn on my wall years ago because his music inspired so many R.I.P😥 pic.twitter.com/60msa6hm3I

Prince was a true innovator and a singular artist. His music and influence will live on for generations. Rest in peace.

Prince was brilliant and larger than life. What a sad day.

We lost one of the greatest Artists who ever lived. Prince's music was the soundtrack to my life. RIP, Royal genius. Nothing compared 2 U...

Saying "prince and Bowie influenced MGMT" is like saying "lava is warm" I don't even know what to do, just mourn and make more music I guess

Seems like I’m in a dream. Prince dead at 57. There are no words to describe this loss.

Shocked that @prince has died at only 57. Such a talent to have died so young #RIPPrince

Damn, not Prince. I was a huge fan in my teen years. This ones hard to take. Wow.

I'm so sad as is the world. We loved you Prince. RIP dear One.

sweet, smooth transitions Prince. thank you for your medicine.

Prince was a true gentleman, a king among men. He was as sharp and as talented as they come. I'm so glad I was lucky enough to work with him

💦PRINCE💦
I wish I could have expressed my love for him before he left. https://t.co/drlyFNWF9X

To a legend that will forever live on, God bless. We will celebrate
your life tonight. @prince pic.twitter.com/z6rbVfTCqi

Today we lost a true artist. Thank you #Prince for all the music you put into this world. #RIP pic.twitter.com/4yZ6Cb5hMb

So sad to hear of Prince's passing; one of the greatest musical talents of my lifetime. Maybe of the 20th century. RIP.

RIP Prince. The only person I ever saw a crowd part for.

"Dearly beloved, we are gathered here today to get through this thing called life." - #Prince #RIP pic.twitter.com/n5DkRYQxTk

Heartbroken over the loss of this American musical genius and Titan of #lovesexy. #Prince pic.twitter.com/Ny6VxdJcP8

If the news about prince is true it will be a terrible loss of such an amazing music legend and icon.

We've lost the greatest artist of my generation. I danced on stage with him when milo was in my belly. Prince, I will forever love you. #RIP

The word genius is overused. Prince, however, was a super-genius. Prolific and visionary. And always a sweetheart. Soundtrack of my life.

Dear brother PRINCE...no words for this deep sadness. Loved you deeply & the precious memories shall forever enrich my soul and empower me.

RIP Prince.... Grateful I had the chance to see him perform! Will forever be legendary.

So this is what it sounds like when doves cry. Prince, you shall be missed by all. Thanks for the music and the joy. pic.twitter.com/rSPit2NcIp

Can't believe Prince is gone.
What a terrible year. So many, so young.

In Minneapolis right now...and it's raining...

I'm a man of words I'm kinda speechless on losing #Prince it's like the Earth is missing a note. Little to say-only thing to do is play ....

I cannot believe that Prince is dead. My brain refuses to believe it. Like some sick internet hoax, it just can’t be true. Leveled.

i can't believe what's happening right now. i just woke up but it feels like I'm dreaming. we live in a world where Prince passes away???

RIP PRINCE..ONE OF THE SADDEST DAY’S TO SAY THE LEAST. HE WAS THE TRUE DEFINITION OF A REAL ARTIST. pic.twitter.com/wt3wA6NHe0

R.I.P. Prince ... One of Miles Davis' last collaborators. You will be woefully missed ...

R.I. P. #Prince. An exceptional talent! He made an enormous contribution to music.

What a sad day today! Terribly sorry to hear that #Prince has passed! What an incredible talent… https://t.co/uxkUwX2PkA

This is what it sounds like when doves cry.. Prince R.I.P.
Condolences to his family & 2 us all

Sad news today about the passing of a legend #Prince. So glad I was able to see him perform. RIP#musicalgenius

Only now do we know what it sounds like When Doves Cry — the absence of music from loss of The Artist. RIP Prince (1958-2016)

I am really not right over this. RIP #Prince this is devastating.

I'm Crushed!! UK news reporting Prince Is Dead?! For Real?! Massive Loss for us all! What a Genius! Speechless.

RIP Prince. Here is a video of the time he joined us on stage in Paris in 2011 https://t.co/U02QBP8vZ0 | #PrinceRIP pic.twitter.com/7nlqyHOoiw

Today is the worst day ever. Prince R.I.P I am crying!

OMG Prince. I can't believe it.

I can't believe #Prince has passed. This is horrible news. #ripprince so sad :( :(

PRINCE, sad to say, has passed on!!! He was a Giant. My deep condolences go out to his family, friends and fans.

"Devastated to hear the news about Prince. An enormous talent that we were all big fans of." - Duran Duran pic.twitter.com/478Q9dVF7K

Now Prince? No no no.. RIP You genius x

I Miss My Brother. Prince Was A Funny Cat. Great Sense Of Humor. https://t.co/67umQghtbi

Can’t even process this. There will never be another. Thank you for everything, Prince Rogers Nelson.

"I am yours now and you are mine
And together we'll love through all
space and time, so don't cry..." RIP @prince