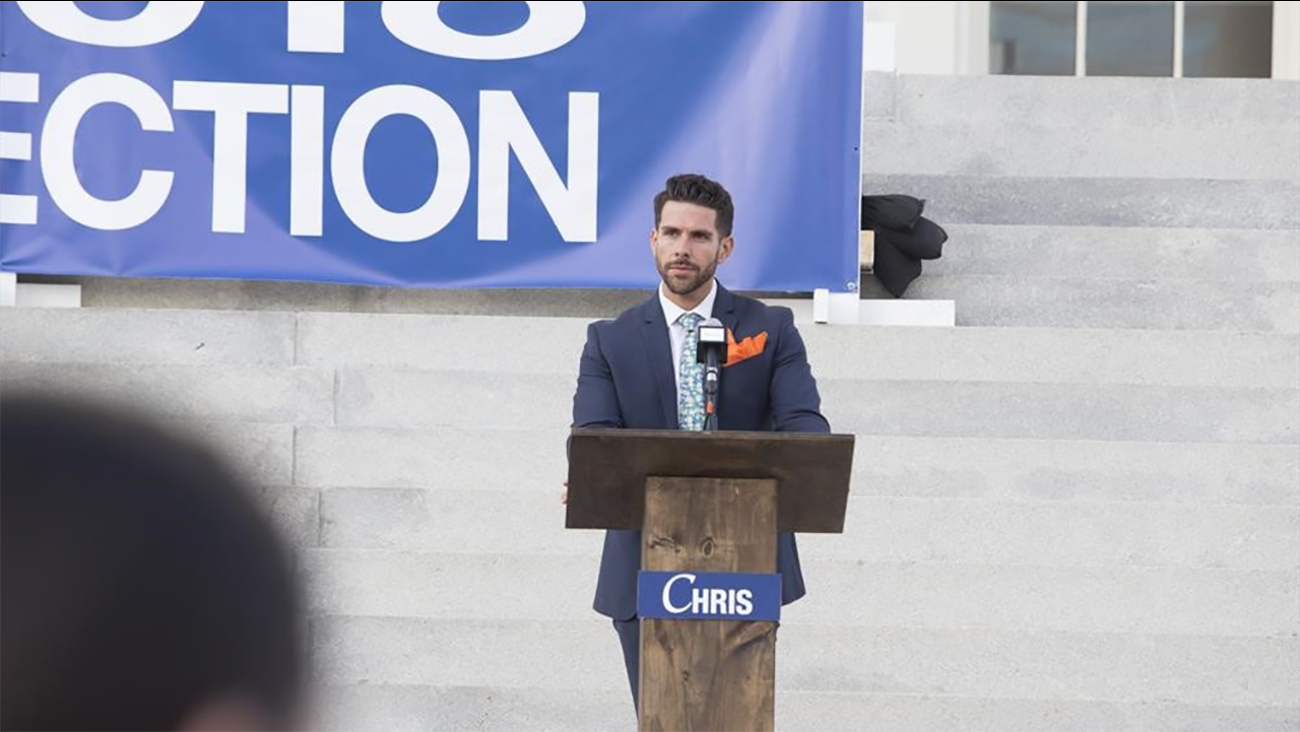 NEW YORK -- Becca and the guys headed to Richmond, Virginia this week to further her relationships with the remaining men. She sat down with Chris Harrison and admitted that she's been looking at babies and thinking that they are extra cute, and Chris called her out for reading wedding magazines on the plane. Becca said that she thinks that she is on the path to finding love...with someone.

The first date card was for Jason and it read, "Life is full of surprises." He's elated that he is finally getting his chance. Chris (her suitor, not Harrison) continued to spiral out of control, saying that he would even want a two-on-one over a group date. Lincoln and Chris continued to go back and forth about who is better for Becca and just who is superior. They cannot handle the pressure. Chris told Lincoln that he was body shaming him because he lost 100 pounds. Those two are just flat out disasters. They started talking about who would destroy who in a fight. It was ridiculous.

Becca and Jason went off on their one-on-one date, riding a trolley through town. They sipped champagne and held hands. They stopped at St. John's Church to explore the history there. Becca and Jason had a great rapport together. Then they went to a donut shop and made a heart donut and then they went to a museum where they kissed! Outside they took part in an "Unhappy Hour." It's about enjoying life through death at a gothic party. It was a bit bizarre.

Becca complimented Jason for always using his time with her to its maximum potential. Becca said that Jason can really kiss, and she was pretty impressed at his skills. Then they walked into a bar, and Becca surprised Jason by having all of his best friends there! How amazing! His friends said such nice things about him, and Becca revealed to the guys that she's quite taken with him. She said that his friends remind her of her own friends, which she loved.

Later, they sat down for the evening portion of the date where they could really get to know each other. Becca said that she's never felt that he has walls up, despite his friends saying that he sometimes has a hard time revealing his true feelings. Jason told Becca a touching story about his father and how he interacted with his grandmother who suffered from Alzheimer's. Jason said that he saw his dad crying his eyes out and it made him realize how you have to appreciate every moment. Becca talked about her own father's death and how they got five years with him, instead of the six months that the doctors predicted. She even shared with Jason that she watched her father take his last breath. They really, really shared a lot on this date. Jason says that he feels like he's falling in love with Becca, but he hasn't told her just yet. Becca offered Jason the rose and he said, "Always, always, always." They went out to a balcony and kissed at the top of a clock tower.

Another date card arrived and it was for Colton, Garrett, Wills, Connor, Blake, Lincoln, and Chris. It read, "Let's make history." Oh great, Lincoln and Chris on the same date, this should be good. On the date, some character actors dressed as presidents met the guys and gave them a little history lesson. The actors announced that the guys would debate to be Becca's "running mate" at "Beccalection 2018." Chris is just being beyond annoying. Chris Harrison was on hand to moderate the event in front of a huge crowd of people outside. The governor of Virginia was even there to ask some questions of the guys. They all did a great job, but then Lincoln tried to throw Chris under the bus by saying he should go home. Chris talked about how some of the guys were "playing with Becca's heart." He went on to say that she would be "disgusted with Lincoln." Chris even revealed the "fat shaming" that went on. Blake started to jump in to defend Lincoln, but added that both guys let it get way out of hand. Blake seemed to just want to end the conversation to save Becca. She called it "embarrasing" that they aired all of their dirty laundry in front of a crowd of people.

The group date moved on to a cocktail party, and Becca went into it feeling frustrated how the day went. She told the guys that she found the event to be "very telling." Colton tried to give Chris a talk in front of the guys where he told him to get it together. Lincoln meantime, told Becca that Chris was the disrespectful one, not him. During his time, Chris asked Becca how she was feeling. She told him that Lincoln and other guys said that he could snap and that Connor doesn't want to room with him. Chris tried to defend himself, but Becca seemed to just hammer away that people thought that he was a threat to them. Instead of just saying that it wasn't true, he kept saying how hurt he was that Becca would even suggest that. She told him she's just asking about things she heard, but Chris couldn't understand.

Garrett saved Becca and stole her away from that awful conversation with Chris. She couldn't focus, so she asked Garrett to leave because she had to gather her thoughts. He was awesome about it. Back with the guys, Lincoln admitted to lying to Becca about Connor not wanting to room with Chris. Garrett sat back down and said that Chris ruined her whole mindset. Becca heard everything Garrett said. I think she's finally realizing that Chris is a bit insane.

Jason and Leo, alone together in the hotel received a date card. Jason read it to Leo, and it was a bit weird that they were alone and he had to read it to just one guy...anyway, it read, "Leo, the world is our oyster."

Back on the group date, Becca walked back in and grabbed Garrett. He revealed that he never got to give his closing statement at the debate and he read it to her. Becca loved it all. Then she had a great chat with Colton. He told her that he's glad that they had the one-on-one the previous week to build on and he was just happy to get a bit of time with her that week. Wills told Becca that he is falling in love with her as they had their alone time. Becca said, "Aww," and then kissed him. Becca went back to the group of guys to talk with all of them. She picked up the group date rose and she offered it to Colton! Garrett and Wills were both crushed that they didn't get it and Chris of course was even more unstable at the end of the date.

Becca woke up the next day a bit troubled from the day before, but wanted to focus on her one-on-one date with Leo. His hair was flowing and he ran up to her and called her "a beautiful thing," as they boarded a private plane. They took a tour over the Chesapeake Bay. She was having a hard time getting out of her head though. Once they landed, she sat down to talk with Leo about what happened the day before. She told Leo that she's emotionally drained and exhausted from the group date. Leo told her that she didn't have to "fake have fun," and that they could just hang out and do nothing. Becca told him what happened on the group date, and Leo told her that a lot of the guys are falling for her. He said to Becca that he knows some people see him like a caricature, but that "I would be yours in the real world if you wanted me to be." LEO! Where have you been hiding?! I love him already, do you Becca?

Then they got on a boat, put on some waders and went clamming. Becca said that they had a ton of fun out there and that he was the perfect person to vent to. Becca ate an oyster and said, "Kiss me now!" And he did! He added, "You're so hot." Ha! It seemed like a great date. Later on, they went into the dinner with a positive vibe. Becca was surprised at her attraction to him. Leo revealed that his parents have been married for more than 40 years! He said his dad is larger than life and he idolizes him. He said that he had an overarching feeling that he's failed his father because he couldn't play pro baseball. He felt all the practicing and sacrificing his dad did for him was a waste of time and he felt bad about it. Becca said that he's a "stand up, amazing guy" and that she doesn't want him to question that. They did some serious kissing! Becca offered him the date rose and Leo happily accepted! The happy couple walked to a nearby theater where Morgan Evans was performing for a big crowd. They danced up on a platform and kissed in front of everyone!

Connor and Jason sat around talking about Chris and how unstable he seems. Chris told the guys he's very confident going into this rose ceremony, and why, they have no idea. Chris wrote a long letter, or something, and then got up and walked away from his room. He apparently sat down and waited with the guys for Leo to return from his very successful date. As soon as the guys gave Leo the high fives and handshakes, Chris jumped up and ran out of the hotel room. He went to Becca's hotel and knocked on her door. Chris told Becca that he can see himself marrying her and he wants to get them back on track. Becca wanted to know what changed. Chris said that he felt like they had taken a step back on the group date the other week and that she didn't care. He told her he didn't want her to think about it anymore, but she told him that the drama he created is seeping into her dates that don't even involve him. Becca told him that she has too many questions and red flags for them to "get there," so she wants him to go home. She told him she knows that it's not going to work out. Chris told her that he didn't want her to walk him out, but she did anyway. She said after he left that she thinks he has anger issues and she doesn't want him in her life...ever. Harsh!

Going into the rose ceremony, the guys were shocked that Chris Harrison showed up. That meant that there would be no cocktail party and Becca was ready to make her decisions.

That meant that Lincoln and Connor were eliminated. Connor looked like he was holding back tears but he told her, "I hope you find love." Next week, Becca is taking the guys to the Bahamas! It looks like the pressure is starting to get to the guys, even the normally cool-headed ones!
Report a correction or typo
Related topics:
arts & entertainmentthe bacheloretteabccominguproseschris harrisonbachelorettebecca kufrin
Copyright © 2021 WPVI-TV. All Rights Reserved.
COMINGUPROSES