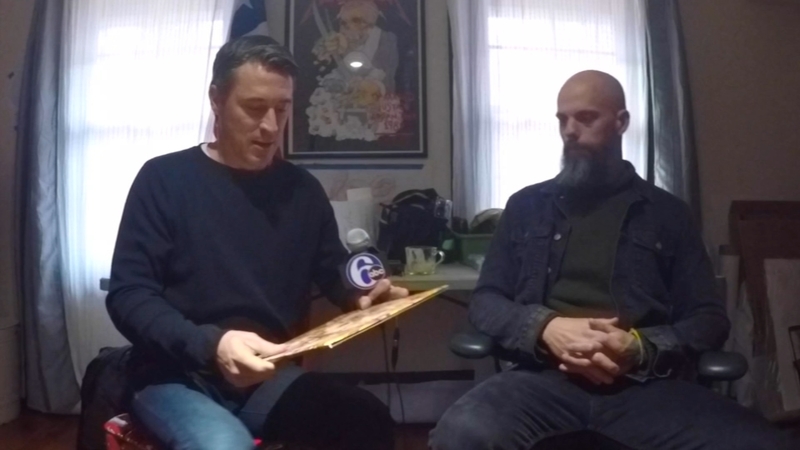 Baroness is one of the most critically-acclaimed and internationally successful bands that fall into the "extreme" metal category (even though they are much more complex than that) and yet few people seem to realize they are based in the Philadelphia area, not Georgia where the band started in 2002. John Baizley, the founder, lead singer, guitarist, composer and album cover artist for Baroness enjoys his partial anonymity around here.

John invited me to his home in Montgomery County where he lives with his wife and daughter, a few weeks after he returned from a European tour to promote Baroness' fifth studio album "Gold & Grey" - my personal favorite of 2019. John's home is the same place where he practices and records with his band, plus paints his many portraits for Baroness and other bands.

We spent two hours (one hour of which was recorded for this podcast) talking about his continued love affair with the Philadelphia region, his obsession with colors, his desire to make his band different in every way and his steadfast resolve to live the "DIY" ethic. Recorded in Bala Cynwyd, PA on December 13, 2019.

Why John chose to call the Philadelphia area as his home and a home base for Baroness several years ago (2:36).

How Philadelphia was like a tractor beam as it was the birthplace of his parents and where John went to elementary school before his move to Virginia (5:20).

Baroness' recent European tour and surviving on the road (7:20).

The ingredient that has been the constant to Baroness' success (8:58).

How touring the world to play music is such an adventure (11:44).

How the stress of touring has led to seven lineup changes with the band (14:00).

John Baizley of Philadelphia-area metal band Baroness says the DIY aesthetic is a moral and ethical code for him. Listen to my interview in a brand new True Philadelphia Podcast on Apple Podcasts: https://t.co/mIqzbnSrCh @YourBaroness pic.twitter.com/omT5yFVf80

The complexity and variance of writing a new record (15:02).

Their performance at The Fillmore Philadelphia and how confident they were onstage (16:06).

Shutting out the noise of critics, whether positive or negative feedback (22:50).

Making the traditional format of a regular band with vocals, guitars, bass and drums different (23:30).

Where the idea of naming each Baroness album after a color (or colors) came from (31:30).

Why the colors motif and the feminine-themed name and artwork for the band has always been a response to the outer music scene (33:30).

Why the explosion of Nirvana on the music scene meant so much to him (35:51).

How the legendary band Fugazi taught everyone how to respect an audience (40:15).

If he believes the crash was fate for him and his band and if it strengthened his resolve to live (48:30).

The oddity of still being able to play guitar with his left hand (which was horribly injured in the crash) but not being able to open a jar with the same hand (50:30).

Where John likes to hang out in Philadelphia, with shout-outs to Union Transfer and the Philadelphia Museum of Art (53:05).

Why you can't "cruise" in Philadelphia as opposed to other big cities (55:10).

His choice for the best band out there right now, plus the best bands from the Philadelphia scene (with shout-outs to Nothing, Sheer Mag and Woe) (58:00).

How the goal of forming a band you cannot categorize can become complicated (1:00:26).