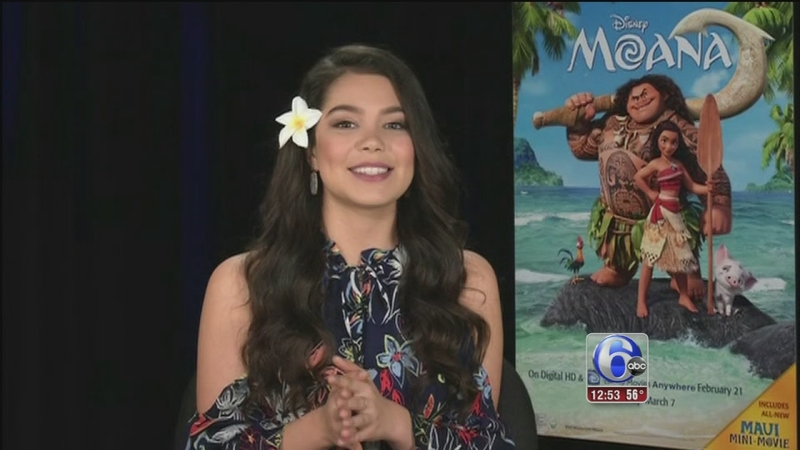 PHILADELPHIA (WPVI) -- Action News had a chance to chat with the talented teenager who is the voice behind Disney's "Moana," the young Polynesian heroine finding her own way.

And when you talk heart to heart with the very impressive and darling 16-year-old Auli'i Cravalho, you learn that she's not that different from Moana.

She's young, brave, and writing her own story.

The high school junior is an only child, who tells us she never had any formal voice or acting lessons, but did put on performances in her living room for mom - who she says, is the only one who showed up.

As she gets ready for her junior prom and calculus tests, she says she's pinching herself at this new chapter in life.

She was discovered by a Disney agent in her native Hawaii and laughs that she was very preoccupied with a tough biology class when she got the coveted chance to audition.

"I was a freshman in high school and freshman year in high school is a confusing time and I was focusing on school during the actual few weeks that I was auditioning for "Moana". Me personally, yes I was in a molecular cell biology class over the summer and it was very hard," she recalled.

And now, Auli'i is a star among stars performing the film's hit song, "How Far I'll Go", which was nominated for original song, at this year's Oscars.

You may have caught the part where she got smacked in the head by one of the flags, but she says it was a reminder that this is not all just a dream.

"I come from an island in the middle of the Pacific ocean. I never had voice lessons, never had acting lessons and didn't think I was going to get it. But as fate would have it, I was the last girl on the last day of casting," she said.
Auli'i says she is now living in New York City and filming a TV pilot.

"Moana" is now available to buy or download. Disney is the parent company of 6abc.