'The Women Tell All' ahead of 'The Bachelor' finale NEW YORK -- The show started with a montage of epic breakups. There was so much crying. It all led up to Colton and Cassie's breakup and Colton jumping the fence. It may be the most played scene in "Bachelor" history. Instead of recapping a series of recaps, we'll take a look at what happened on stage.

Courtney confronted Demi about her comment that she was "the cancer of the house." Onyeka and Nicole rehashed their "bullying" fight. It was all hard to understand because all of the women were talking over each other. There was a lot of finger pointing and yelling until Nicole sat back down. This segment was pretty much a mess.

Katie said that some things she heard in the house made her think several women weren't ready for marriage. She said she was talking about Caelynn and Cassie. She says what they value doesn't align with what Colton wants. Katie said that Caelynn is manipulative and dishonest about the conversation she had with Cassie about how they could be "The Bachelorette." Hannah B. and Caelynn almost started to talk about their issues, but they decided to just say they've made peace with each other. Then Demi and Courtney argued some more. Demi said she regretted calling Courtney "the cancer of the house" because she was more like "bedbugs because she kept annoying her." Ha, Demi is hilarious. Courtney got in her face and tried to shove a pacifier in Demi's face! That was really inappropriate.

Demi was first in the hot seat. She said she really had strong feelings for Colton and watching him break her heart made her tear up. Demi joked then and told Chris Harrison that Colton's virginity excited her. She added that she's comfortable with herself and thinks she's plenty mature. Chris Harrison alluded to the fact that we might be seeing her in "Paradise."

Nicole was in the hot seat next and does anyone else kind of feel like we already heard from her enough this episode? Halo Top Ice Cream gave her a 1-year supply to help her dry her tears since she always cries. Then Colton ate the ice cream in the shower.

Hannah B. was in the seat next and she talked about her struggle to be herself. She reiterated that she wants someone to love her fiercely and let's hope she finds that. Because she did such a horrendous toast during her and Colton's date, Chris asked her to do it over and she did a great job.

The entire Bachelor Nation thanks you ❤️ #TheBachelor @chrisbharrison pic.twitter.com/oFsqRVd4Ym

Caelynn said during her time that she really felt that she was falling in love with Colton and he told her he felt the same way. She couldn't understand how they went from having the best time ever to nothing. Chris Harrison told her that she'd have a chance to ask Colton her questions about their breakup once he comes out on stage. She also said that she was grateful to "Bachelor Nation" and the other women on the show for the support after she shared her story about her past sexual assault.

At long last, Colton appeared on stage. He looked right at Caelynn as he sat there. He knew he'd have to face her. Demi used her time talking to Colton to thank him and then "introduce" him to Courtney. Crickets. It was just really tense! Back to Caelynn...it was very awkward and she immediately teared up upon talking to him. She asked him when he knew she wasn't the one. Colton said it was a very hard rose ceremony, and he basically doesn't know what to say to her. He doesn't know why it just is what it is. Caelynn said she loved him, he didn't love her and it just sucks. Hannah B. made some peace with Colton and he wanted to tell her that he wishes he had done some things better with all of the women, but Hannah added that he has a great heart.

Sydney asked Colton if he is still a virgin, and he talked about how it's snowing in Denver and Chris Harrison stopped him. They wouldn't let him answer! Maybe we'll find out during the "After the Final Rose" special next Tuesday.

Chris Harrison asked Colton about the fence jump and he said that he didn't realize it was an abyss on the other side. Colton said it was devastating that Cassie didn't reciprocate his feelings. He said that just because you are "The Bachelor" it's no guarantee you'll end up in a relationship. Next week, it's a two-night finale. What happens after the fence jump? We'll have to wait and see. The preview ended with Colton knocking on a door, but whose door is it?

Thanks for watching the #WomenTellAll! You don't want to miss the 2-Night Live Finale Event starting Monday at 8|7c on ABC. #TheBachelor pic.twitter.com/rAMEBKrJMg

'Bachelorette' Tayshia talks about how her journey is different from Clare's 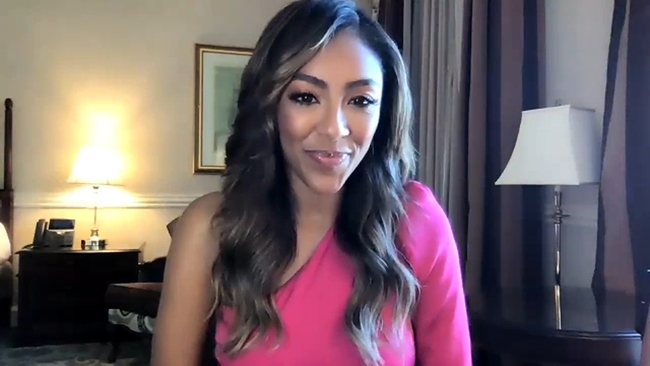