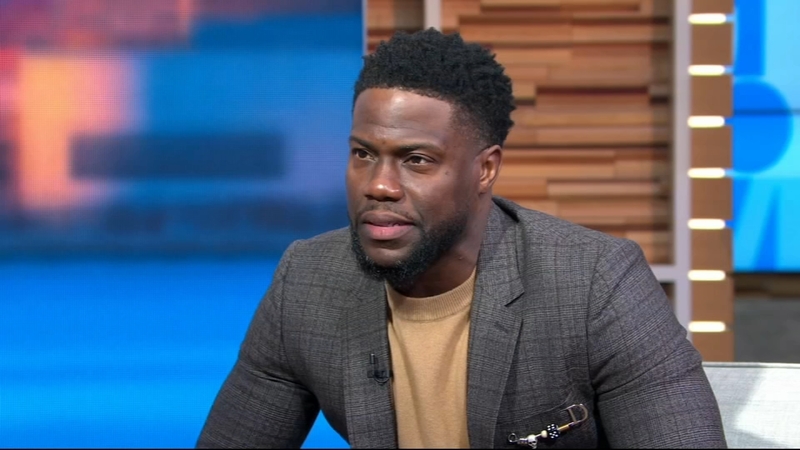 PHILADELPHIA (WPVI) -- We are all in this together and everyone is doing what they can to help.

Celebrities are coming together for the "All-In Challenge" to raise money for those in need during the coronavirus pandemic.

The challenge was created by Fanatics founder and Philadelphia 76ers owner Michael Rubin.

"Through the newly created ALL IN Challenge, sponsored by the All In Challenge Foundation, the world's preeminent sports, music and entertainment figures will donate their most prized possessions and be challenged to create once-in-a-lifetime experiences that will be both available for online auction and as giveaways. The All In Challenge Foundation and Fanatics sit at the unique crossroads of working with nearly every league, team and athlete in this country (as well as many internationally), while having many connections to entertainers and celebrities who are friends, but also sports fans. Together, the ALL IN Challenge will hopefully raise tens of millions of dollars to tackle this problem head-on," the website says.

(Thread):
I continually say that it’s the responsibility of leaders in sports and business to step up and make a real difference during the most difficult times!! pic.twitter.com/olaoKnLmxI

Rubin, who is from Lafayette Hill, made sure to have a lot of Philly celebrities involved in the challenge.

Comedian Kevin Hart is auctioning a speaking role in one of his movies.

"You will be the next Denzel or the next Kerry Washington or whoever your favorite actor or actress is," Hart says in his video.

The winner will get the "A-lister movie star experience" including your own trailer, assistant, car service, wardrobe and a stay in a five-star hotel.

JUST IN: @KevinHart4real is now ALL IN! Kevin Hart is offering up an opportunity to be in his next movie and you have a chance to enter to win! Visit https://t.co/K1pgbCkwkM to learn more and help raise tens of millions of dollars to feed those in need. #AllInChallenge pic.twitter.com/HQYBAZ5Lsn

Philadelphia rapper Meek Mill is donating his Rolls-Royce Phantom to the challenge. According to its description, the car has "the quietest cabin ever conceived."

JUST IN: @MeekMill is going ALL IN! Meek is donating his 2019 Rolls-Royce Phantom and you can bid now! Visit https://t.co/K1pgbCkwkM to learn more and help raise tens of millions of dollars to feed those in need. #ALLInChallenge pic.twitter.com/ubaVR1mKws

Of course, there are a number of Philadelphia sports options to bid on as well.

The Eagles are offering a chance for a Birds fan to design and call out a play during a preseason game. The winner will attend training camp practices, work with offensive coaches and learn playcalling concepts.

JUST IN: The @Eagles are ALL IN! The Philadelphia Eagles are offering up the opportunity to Design and Call A Play At Philadelphia Eagles Preseason Game! Visit https://t.co/K1pgbCkwkM to learn more and help raise tens of millions of dollars to feed those in need. #ALLInChallenge pic.twitter.com/G0Se2C88Jb

Speaking of the Eagles, Zach and Julie Ertz are offering a double date where the winner will have dinner and then sit courtside with them at a 76ers game.

@julieertz & @ZERTZ_86 are ALL IN! Zach and Julie are offering a double date where you’ll have dinner and head to a Sixers game to sit courtside! Bid Now! Visit https://t.co/K1pgbCkwkM to learn more and help raise tens of millions of dollars to feed those in need. #ALLInChallenge pic.twitter.com/D5RFk60VsO

And speaking of the 76ers, Ben Simmons has also accepted the "All-In Challenge." One winner and nine friends will get the ultimate NBA experience. The winner will run onto the court with Simmons as their names are called. The winner and one friend will then sit courtside. The day will also include a 5-on-5 game coached by Simmons and another 76ers star, followed by a post-game dinner.

JUST IN: @BenSimmons25 is ALL IN! Ben is offering up a once in a lifetime NBA experience with him and you have a chance to bid right now! Visit https://t.co/K1pgbCkwkM to learn more and help raise tens of millions of dollars to feed those in need. #ALLInChallenge pic.twitter.com/dmVlanB0Bd

Other experiences to bid on include Justin Bieber singing at your home, Tampa Bay Buccaneers home opener invite by Tom Brady, a walk-on role in a Martin Scorsese film with Leonardo DiCaprio and Robert De Niro, throwing out the first pitch at the World Series, being Ryan Seacrest's next co-host, dinner with WWE's Undertaker, a private skateboarding lesson with Tony Hawk, and star in a TikTok video with Zach King.