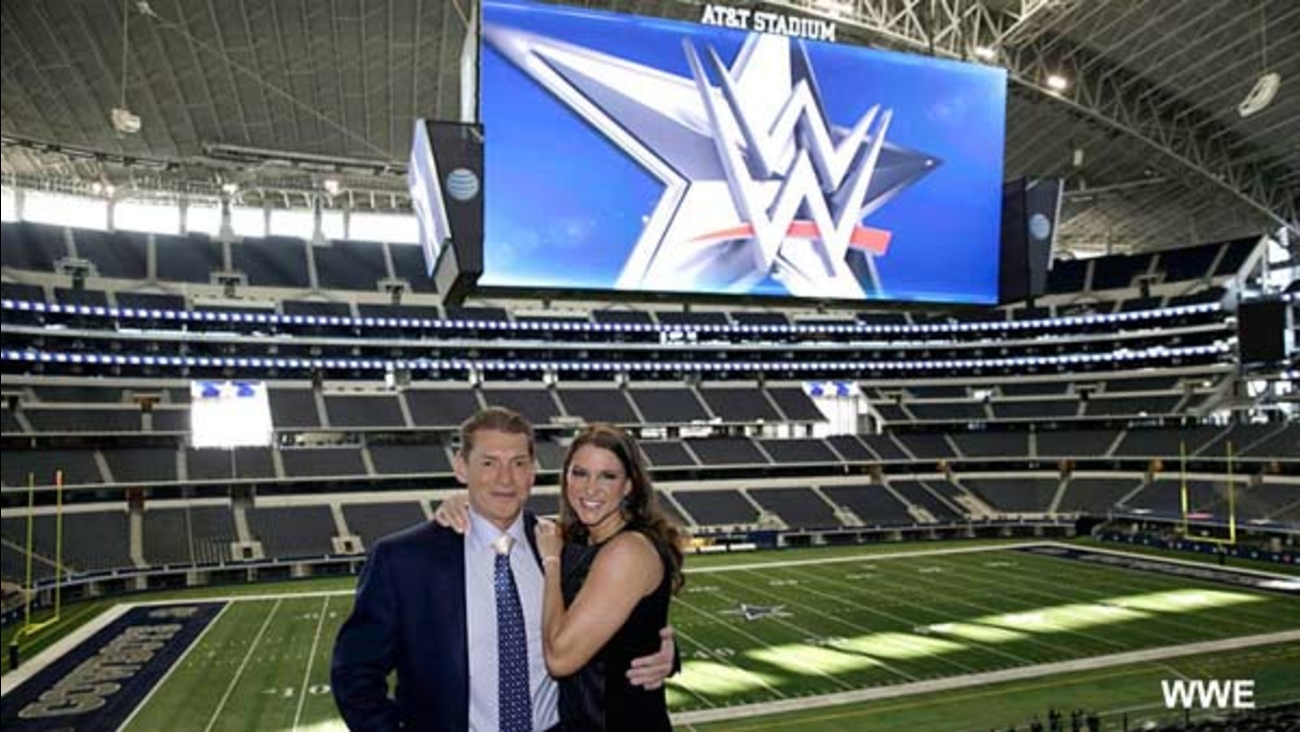 PHILADELPHIA (WPVI) -- As sports fans in the Philadelphia area gear up for Villanova's first Final Four appearance in 30 years in Texas, others are heading to the Lone Star State for an entirely different reason.

AT&T Stadium in Arlington will be the site of this year's pro wrestling Super Bowl. Names like Brock Lesnar, Triple H, The Undertaker, and Shane McMahon will grace the squared circle for the annual sports entertainment spectacular that began, coincidentally, in 1985.

That first year nearly 20,000 filled Madison Square Garden. Two years later, a reported 93,173 sold-out the Pontiac Silverdome in Michigan. This year, WWE is looking to break that attendance record; they are hoping 100,000 of its loudest, passionate, and energetic fans will journey to Jerry's World to witness entertainment history.

One of those heading down to the Dallas area is a man no stranger to most wrestling fans. For more than 50 years, Bill Apter has reported on the unique world of professional wrestling. 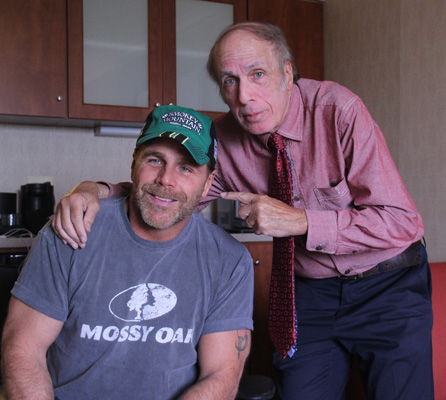 "WWE is the best value in athletic performance and that is why 97,000 plus fans coming from all over the globe will be at WrestleMania in person while others tune in from all over the world to watch this amazing spectacle on the WWE Network," Apter said.

Apter, a New York native, now living in the Philadelphia area, made a name for himself with his series of magazines. Nowadays, wrestling fans are more likely to get their updates from websites, social media, and online forums like Reddit. A lot of the talk on those sites going into WrestleMania has been about the injuries.

Top superstars like John Cena, Seth Rollins, Sting, and Randy Orton have been sidelined and are not on the card for the company's biggest show.

ESPN's David Shoemaker even wrote an entire article about the injuries that plagued this year's show of shows.

Call it the "Lost WrestleMania." Set inside of "Jerry World," with the potential to set the U.S. record for indoor attendance, WWE knew it had to put on the biggest show of the past 15 years, but bad luck, mostly in the form of injuries, have turned the roster into a baby-oiled MASH unit. WWE has tried to paint WrestleMania 32 as a megacard, but it seems as if the talent left off the match lineup could sell more tickets than the one currently on it. But such is the world of pro wrestling, in which the outcomes are predetermined but the physical toll is real. "Card subject to change" isn't just a disclaimer -- it's a way of life.

Apter, who is still in the business with his website 1wrestling.com and a new book 'Is Wrestling Fixed? I Didn't Know it was Broken,' says while the injuries may have changed the original plans, WWE always has a backup.

"Keep in mind the creative people at the WWE always have some sort of backup plan just in case injuries take some of their Superstars out of commission. Of course, fans want to see the athletes you mentioned, but if they are unable to perform due to injuries, plan B has to be created and the WWE is a master of that," Apter said.

Plan B may be the reason Shane McMahon, son of CEO Vince McMahon, returned to TV last month, told his villainous father he wanted control of the flagship show Monday Night Raw, and then was immediately thrown into a WrestleMania match against WWE stalwart The Undertaker.

The Undertaker, who is 22-1 at WrestleMania, will meet Shane inside a roofed steel cage structure known as Hell in a Cell.

"It's a whole different atmosphere. I have so much respect for The Undertaker, he's the measuring stick of the business; he's carried the business on his back for quite some time. I've known him for a very long time, but when you're in there, it is intimidating and so you just got to let it rip and that's exactly what I'm going to do," Shane said.

Shane McMahon drops an elbow on The Undertaker.

In his own right, Shane, who is not a wrestler by trade, has provided memorable moments throughout his time as a performer including being suplexed into glass by Kurt Angle at King of the Ring 2000 or battling X-Pac at WrestleMania XV in 1999 in Philadelphia.

The Undertaker had been rumored to meet John Cena or Sting at Mania, but with both on the disabled list, a substitute had to be named. And though he stepped away from WWE six years ago, Apter believes Shane-O-Mac will provide a Mania-worthy match.

"As far as a quality opponent, Shane gives 1,000% of himself no matter what he does so that should tell you what he will be like as an opponent for Taker. Undertaker feeds off of an opponent's energy so he will have plenty in this Hell in a Cell match. Shane is a reckless hardcore style wrestler. I am looking forward to seeing what out of the box moves he will bring to it," Apter said.

Fans are torn. Many are hoping Shane McMahon takes Raw away from his evil father, brother-in-law Triple H, and sister Stephanie. But if Shane wins, that means, according to the advertised stipulation, The Undertaker will never wrestle at WrestleMania again.

"If by some chance he does lose, I see some way for him to get back, perhaps that would be at (WWE's annual August event) SummerSlam," Apter said.

The Undertaker is not the only mainstay to appear on Sunday as this will be Triple H's 20th WrestleMania appearance. But even so, he says he still has those butterflies he had wrestling The Ultimate Warrior during his first appearance at WrestleMania XII.

"Overwhelming, as it is every year. People say, it's 20 times you've been to WrestleMania, do you still get butterflies? If you don't, you don't care. I'm as nervous now for it as I probably was for my first one," Triple H said on SportsCenter. ""It is everything as a performer that you hope for it to be."

Triple H is defending his title at WrestleMania 32.

Triple H, the reigning WWE World Heavyweight Champion and the company's Executive Vice President, Talent, Live Events & Creative, is looking for a way to retain his title against the number one contender Roman Reigns.

Reigns is billed as the top babyface - wrestling term for good guy- however, for one reason or another, many fans have taken to booing him. In fact, a year ago at the Royal Rumble in Philadelphia, Reigns, with the help of his cousin The Rock, won the match, only to be showered in a chorus of boos from the Philly crowd.

Apter cannot understand why the fans are turning on Reigns.

"Roman Reigns has worked so very hard to get where he is at Mania time. I cannot figure out why he is booed. He works so hard in the ring and is very competitive. Will we have a new World Champion after Mania? Perhaps and then I envision Roman's former partner, currently sidelined, Seth Rollins, challenging him for that belt," Apter said.

On Instagram Wednesday, The Rock, who will appear at WrestleMania, not necessarily in a wrestling capacity, told of a similar situation he was in back in 1997 that may be a message for his cousin.

"I was 25 years old, the youngest Intercontinental Champion in WWE history and performing in WrestleMania 13. It would become one of the most defining moments of my life. Not because it was my first WrestleMania I had the privilege to be a part of, but because I was booed out of the building," The Rock wrote.

He said it all changed a few weeks later when Vince McMahon asked him about becoming a heel - a bad guy. The Rock said on one condition, he gets to be himself. Real. Authentic.

"Even though I hated being booed out of the building at WrestleMania 13, I learned one of the greatest life lessons that still serves me today. Be real. Be authentic. Be me," The Rock wrote.

It doesn't get any more authentic than Brock Lesnar, a former NCAA wrestling and UFC Champion, who will be competing against Dean Ambrose in a street fight at Mania.

When asked by Coachman on ESPN what his favorite WrestleMania moment has been, Lesnar said he didn't have one. Yet.

"I really don't have one. I'm looking forward to the future and I never really look behind," Lesnar said.

Brock Lesnar is seen with his advocate Paul Heyman days before WrestleMania.

His future may involve a barbed wire baseball bat and a chainsaw, gifts given to Ambrose by wrestling legends Mick Foley and Terry Funk in the weeks leading up to WrestleMania. Ambrose, nicknamed the Lunatic Fringe, appears to be a future heavyweight champion and a win over Lesnar could cement that.

"The first time I laid eyes on Ambrose I said that if Terry Funk and Dick Slater, kind of a Funk clone in the 1970s, had a kid together it would be Dean Ambrose! Yes, Dean is cut from the same cloth as Funk and Foley and he is a legit threat to Lesnar. Brock loves an all-out brawl. Dean will give that to him," Apter told 6abc.

The male wrestlers aren't the only ones who will grace the ring on Sunday night. The female wrestlers, known as Divas, will have two matches. Charlotte, the daughter of 16-time World Champion Ric Flair, will defend her Divas Championship against Sasha Banks and Becky Lynch.

Sasha Banks is looking to become the new Divas Champion at WrestleMania 32.

These three became household names during their time in WWE's developmental system known as NXT. They were brought up to the main roster when wrestling fans were clamoring for better opportunities for the women grapplers.

Stephanie McMahon, the daughter of Vince, wife of Triple H, and WWE's Chief Brand Officer, told ESPN this week that was the catalyst for what became known as the Divas Revolution.

Apter is one of the many pleased with how the women wrestlers have been showcased in recent months.

"The Divas match will have incredible moments. Fans who saw Charlotte against Natalya (former WWE wrestler Jim "The Anvil" Neidhart's daughter) in a match as few weeks ago called it one of the best televised matches in a long time. The female division is on fire and these three will light it up for sure," Apter said.

WrestleMania will also see a battle royal in honor of the famous Andre the Giant, a 7-man ladder match for the Intercontinental Championship, and a 4-on-3 tag match.

But Philadelphia fans must be asking - why Dallas?

"Cities bid on WrestleMania the same way they bid on the Super Bowl...the incredible revenue that we generate the entire week because we're there for an entire week's worth activities. So (Jerry Jones' daughter and Dallas Cowboys' Executive Vice President and Chief Brand Officer) Charlotte Jones Anderson had actually flown up and given this whole big pitch to the entire WWE executive team and there was no way to say no to Charlotte. So, of course, Vince, my father, said 'absolutely, yes' on the spot," Stephanie told SportsCenter.

The question remains will WrestleMania ever return to Philadelphia? 6abc has been following the often rumored Philly Mania prospect for years.

6abc reached out Thursday to the Executive Director of the Philadelphia Sports Congress Larry Needle who repeated his previous statement that "Our policy as a Bureau is not to discuss any bid activity related to prospective conventions or events, etc."

But for Philadelphia wrestling fans, Apter included, Philadelphia should definitely be on the list of future WrestleMania host cities.

"Of course! Why? Because the Philly fans are great. They are true fans, they say and react how they really feel, and they help make an event like this even more spectacular," Apter said.

So while we wait for a WrestleMania on Broad Street, WWE - like Villanova - is hoping to make history this weekend in Texas.