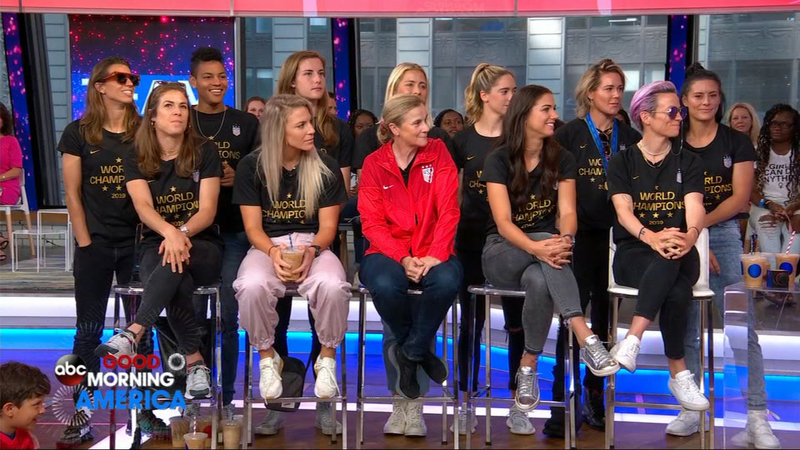 TIMES SQUARE, New York -- The day before being honored for their historic World Cup win in a ticker tape parade, the United States women's national soccer team appeared on Good Morning America to answer questions about their win, discuss their demand for equal pay, and drink much-deserved iced lattes.

The US won its record fourth Women's World Cup title and second in a row by beating the Netherlands 2-0 Sunday.

Host George Stephanopoulos asked Megan Rapinoe if the word "dynasty" suits the team, and she agreed.

"If the shoe fits, you gotta put it on," she joked.

The show aired a photo of a young Rapinoe as a fan decked in face paint during the legendary 1999 Women's World Cup win. They also delved into the journeys of Rose Lavelle, who watched the team's last win in 2015 from a pizza parlor, and Crystal Dunn, who was one spot away from making the team in 2015.

Lavelle said this was not a dream come true because it was something she "really felt was going to be a reality." Dunn said hard work brought her to where she is today.

"That's what I decided to do 4 years ago: Not hang my head. Invest in myself. Believe in myself. Surround myself with people who wanted it for me," she said.

RELATED: US Women's National Team to appear on the ESPYS

Coach Jill Ellis was among the team and credited this year's win to the women's strong bond.

"They're incredible individuals, but they are a force," she said.

That force was certainly on display during the semifinal game against England.

Clutching the World Cup trophy on the GMA set, goalkeeper Alyssa Naeher talked about that epic save during the penalty kick.

Now in the spotlight, the team has turned the nation's attention to their demand for change. Sunday's on-field trophy presentation was followed by boos and chants of "equal pay," a call for FIFA to pay the women's team equal pay to that of their male counterparts.