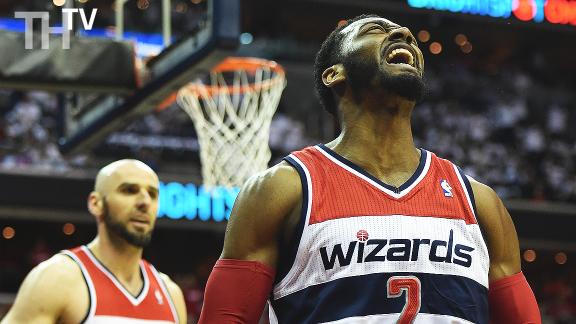 CHICAGO -- When the Chicago Bulls and Washington Wizards tip off at the United Center on Tuesday night for what could be the final game of their first-round series, it might not be easy to identify the more desperate team.

The Wizards lead the series 3-1, they will get difference-making center Nene back from a one-game suspension, and a spot in the second round could be theirs for the first time since 2005. Yet they are the ones trying to work themselves into a frenzy for Game 5.

"We have to win one game, and we have to be desperate," coach Randy Wittman said after shootaround Tuesday. "We have to be the desperate team tonight, coming in here with the attitude that we need to win this game. That's how we've approached each game in this series so far, and I want them to continue that."

The hungriest of all Wizards players could be Nene, who sat out Game 4 following an on-court altercation with the Bulls' Jimmy Butler. Watching his teammates play so well without him on Sunday made him proud. It also gave him a burning desire to contribute again.

"Heck yeah, for sure," Nene said about being inspired by his team's play. "I couldn't be on the court, but in spirit I was there."

He declined to talk about his suspension, saying it's all about the present now. But what if the Bulls try to get him off his game by aggravating him?

"I'm very professional, very mature about that," Nene said. "I have been through a lot of hard situations, and that's not going to get under my skin."

Nene and center Marcin Gortat have neutralized the Bulls inside on both sides of the court, while bigger guards like John Wall, Bradley Beal and Trevor Ariza have caused problems for the Bulls' backcourt. Bulls center and NBA Defensive Player of the Year Joakim Noah has been neutralized in the first four games of the series.

When the Wizards did lose a game to the Bulls, it took a 35-point performance from Mike Dunleavy to help sink them, not to mention the Nene ejection, which cost the big man the final 8:28 of the game.

"It's about hard work and a commitment and believing; that's what it's about," Nene said. "Fortunately, we have been playing at a good level, doing the right thing, denying their strength, and we don't need to change anything right now."

If the Wizards can get off to another hot start, similar to the 14-0 run they went on at the outset in Game 4, Gortat was bold enough to predict a stress-free evening, sort of.

"It can be really difficult [to close out the series], but at the same time, it might be actually be really easy if you're going to come out strong and get to the Chicago team early," he said. "At some point they might just break down. But knowing Chicago, they will probably stay for 48 minutes.

"There are a lot of teams that when they get hit in the first two quarters, they're done. But I don't think it will happen with Chicago."

Teams on the Brink
The Thunder, Bulls and Grizzlies all have big aspirations that could be ended way earlier than they hoped. David Thorpe on how they got here.
Related topics:
sportsespn2014 nba playoffsfirst roundseriesgame 5randy wittmandesperatenbawashington wizardschicago bullsnene hilario
Copyright © 2020 ESPN Internet Ventures. All rights reserved.
More Videos
From CNN Newsource affiliates
TOP STORIES