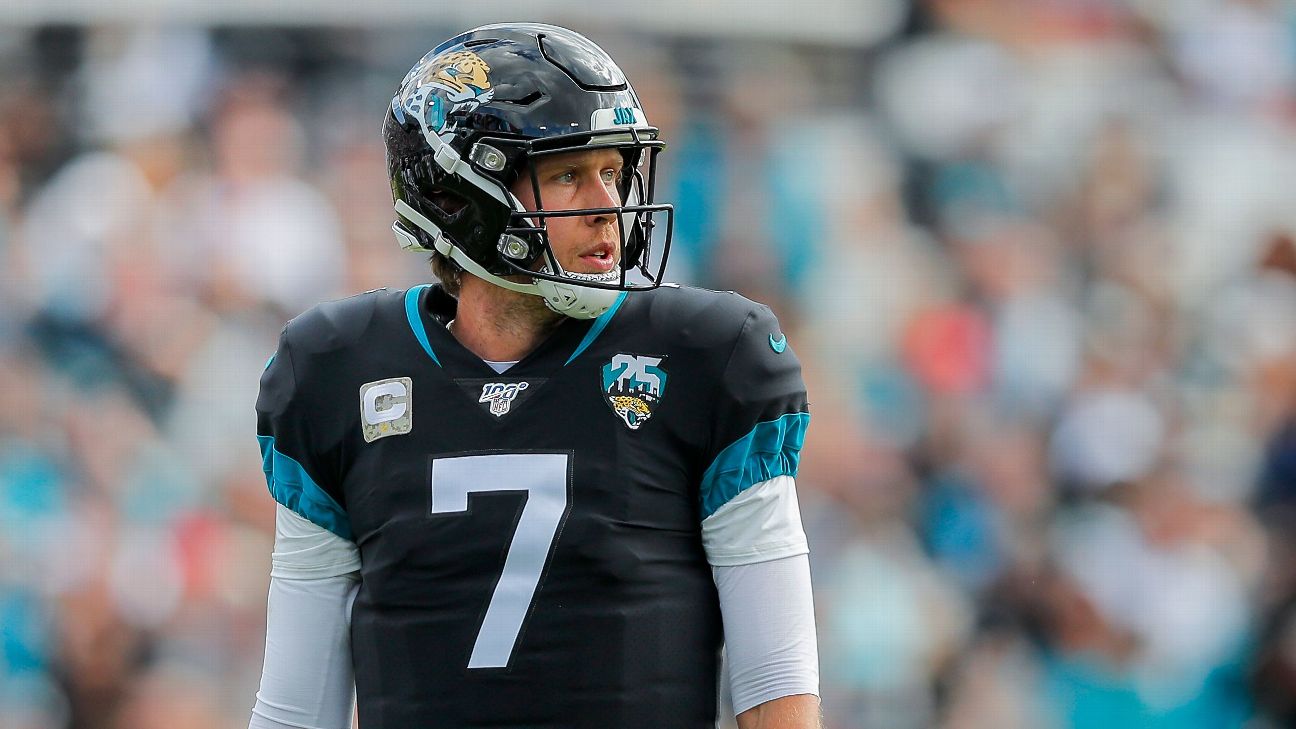 The Bears are giving up their compensatory fourth-round pick (No. 140 overall), which now gives the Jaguars 12 picks in the upcoming draft.

Trading Foles means the Jaguars are going with second-year playerGardner Minshewas their starter, unless they plan to use their stockpile of draft picks to move up in the first round to draft a quarterback.

The Bears, meanwhile, entered Monday's legal tampering period with an urgent goal to acquire a veteran quarterback to compete with starter Mitchell Trubisky.

Trubisky hadsurgery in January to repair a partially torn labrum in his left shoulder, but is expected to be ready when training camp opens in July.

At last month's NFL combine, Bears general manager Ryan Pace reaffirmed the organization's belief in Trubisky, who threw for 3,223 yards, 24 touchdowns and 12 interceptions and rushed for 421 yards and three touchdowns in 2018. Pace, however, left the door open for possible competition at the quarterback position.

There is a strong familiarity level between Foles and Chicago's coaching staff. Bears head coach Matt Nagy coached Foles in both Philadelphia and Kansas City, while offensive coordinator Bill Lazor, quarterbacks coach John DeFilippo and offensive line coach Juan Castillo all overlapped with Foles during various stints with the Eagles.

The trade is just the latest twist in a twisting, emotional career for Foles since Philadelphia drafted him in the third round in 2012. He started six games as a rookie in place of an injured Mike Vick and came in to replace Vick again in 2013, throwing 27 touchdown passes and only two interceptions in 13 starts. He led the Eagles to the playoffs and was the offensive MVP of the Pro Bowl.

Foles was the Eagles' unquestioned starter in 2014, but he suffered a broken collarbone in a Week 9 victory over Houston and finished the season on injured reserve. Coach Chip Kelly surprisingly traded him in the offseason to St. Louis for quarterback Sam Bradford, and Foles struggled with the Rams (7 TDs, 10 INTs) before getting benched in favor ofCase Keenum.

Foles has said multiple times that he considered retiring after the 2015 season because he had lost his love of the game. He agreed to sign with Kansas City as the backup to Alex Smith, mainly because he would be reunited with former Eagles coach Andy Reid, who selected Foles in the third round of the 2012 draft.

Foles regained his love the game, went back to Philly as a backup QB and ended up coming off the bench in place of an injured Carson Wentz to start the final three games of the 2017 season. He threw for 971 yards and six touchdowns with one interception in three playoff games, and he was named MVP of Super Bowl LII after throwing for 373 yards and three touchdowns in a victory over New England.

He again backed up a healthy Wentz in 2018 but was pressed into service when Wentz suffered a back injury. Foles started the final five games of the regular season and two more in the postseason, which ended with the Eagles' divisional round loss to New Orleans.

Foles bought out his contract with Philadelphia for $2 million in February 2019, and the Jaguars signed him to a four-year, $91 million contract with $50.125 million guaranteed. At the time, Jaguars owner Shad Khan said the team had dreamed of signing Foles since the 2018 season had ended.

Foles was impressive during the offseason and training camp but played minimally in the preseason as part of coach Doug Marrone's effort to keep key players healthy. He played well early in the season opener against Kansas City, but he suffered a broken collarbone on the 11th offensive snap when he was driven into the turf by defensive tackle Chris Jones while throwing a touchdown pass to DJ Chark.

Foles missed the next eight games and Minshew, a rookie sixth-round pick, captured the nation's attention with his run-around style of play, mustache, headband and jorts. The Jaguars went 4-4 with Minshew as the starter, but he struggled badly in the team's 26-3 loss to Houston in London and Marrone opted to go back to Foles, who had been cleared to play.

Foles didn't play well in his return. The Jaguars managed just 13 points in a 20-point loss at Indianapolis and scored only three points in the first half of their next two games (at Tennessee and against Tampa Bay). He was particularly bad against the Bucs, turning the ball over on the Jaguars' first three drives -- the first QB to do that since Chicago's Mike Glennon in 2017 -- and posting three consecutive three-and-outs after those turnovers.

Marrone benched Foles at halftime of that game.

Minshew finished the season as the starter, and he had the best passer rating (91.2) and fewest interceptions (six) among rookie quarterbacks -- only the Giants'Daniel Jones (24) had more touchdown passes (21).

Foles said after the season that he didn't know what his future would hold but he wasn't considering retiring.

"I know people will go there," Foles said. "It took me several months of sort of going through an eval, trying to figure out what I wanted to do until I had a moment where I prayed about what I needed to do and it was ultimately getting back in football, facing my fear. Fortunately, the good Lord's allowed me to go through that before.