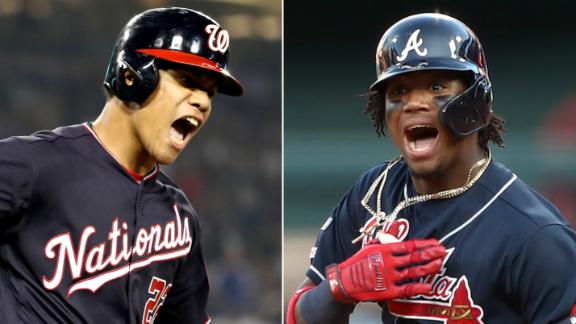 MLB said that "out of abundance of caution" the game will also not be played on Friday, the buffer day built into the schedule for Opening Day postponements.

Nationals general manager Mike Rizzo had said Wednesday that his club would be down five players and a staff member for Opening Day after a player tested positive for COVID-19.

There are concerns about at least one more positive COVID-19 test with the Nationals after the positive test Wednesday, sources told ESPN's Jeff Passan.

The next game scheduled between the two teams is Saturday at 4:05 p.m. ET.

Wednesday's positive result came from a test conducted Monday while the Nationals were still in Florida for spring training.

The flight home was where there was close contact between the player who tested positive and the four teammates and staff member who are now quarantining.

Per MLB's health and safety protocols for 2021, the player who tested positive will be required to isolate for a minimum of 10 days, receive appropriate care and monitoring from the club medical staff, and be cleared by baseball's joint COVID-19 committee and the individual's team physician after a mandatory cardiac evaluation and a determination that the individual no longer presents a risk of infection to others.

Rizzo did not identify any of the six members of the organization who are involved.

The Nationals -- who had planned to have a workout at their stadium Wednesday before it was called off because of rain -- did not have a single player test positive during their six weeks of spring training camp in West Palm Beach, Florida. The team has not yet been vaccinated.

Rizzo said he has received one shot of the vaccine and will advise players to get it as soon as they are eligible but will leave the decision up to them.

Rizzo said the team underwent a new round of COVID-19 tests Wednesday, as was previously scheduled -- a combination of rapid tests and MLB-mandated saliva tests. He noted that there are players available to be brought in from the club's alternate training site in Fredericksburg, Virginia.

ESPN's Jesse Rogers and The Associated Press contributed to this report.