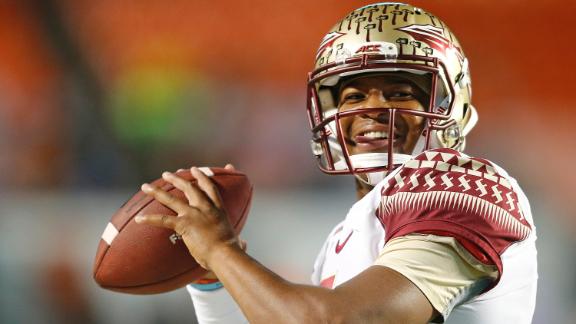 
The Bucs, coming off a 2-14 season, have a chance to land a potential franchise quarterback in Jameis Winston or Marcus Mariota. They hold the No. 1 overall pick -- the same spot in which the franchise took Selmon, Bell, Testaverde and Jackson.

"It's huge," Licht said Monday as he held his pre-draft meeting with the media. "Personally, I think it's probably the biggest draft in the history of the organization. We've got a real chance to really put us over the top and get us to the level that we think we're going to be at this year, which we think is competing for a championship. It's a great draft, and it's a great draft to have the No. 1 pick."


Licht stopped well short of saying how the Bucs will use the pick but did acknowledge that there is a consensus favorite.


"Going back all the way to [the combine], we said we had a leader in the clubhouse, and we still do," Licht said. "If we had to pick today, we'd feel very comfortable making the pick.


The Buccaneers have done extensive homework on Winston and Mariota. In particular, they have done a lot of research into Winston off the field.


The Florida State quarterback has had several off-field incidents, including an allegation of sexual assault, for which he was not charged. Winston's accuser filed a civil lawsuit last week, which Licht said was not a surprise to the team.