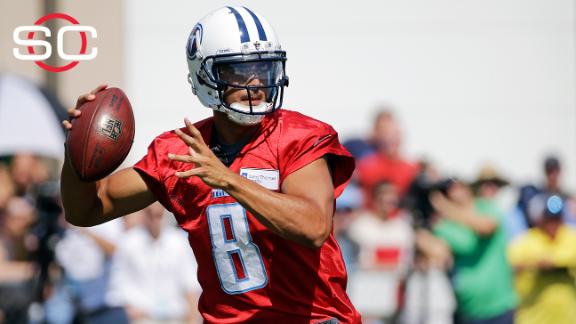 It's something they discussed with him, and they said they'd work out upon his return for training camp. But in the team's first practice Friday, quarterbacks coach John McNulty noticed the problem was gone.

Running backs coach Sylvester Croom noticed it, too, and sauntered up to McNulty to say, "I think he took that stuff to heart."

"There were a couple things in his footwork with the run game, and now he's got it aced," McNulty said. "So obviously he worked on that over the five weeks."

"... It's just getting out from under center, and getting to different landmarks quick enough so he wasn't cutting the back off. It just was a little glitch on how he was tacking the snap from under center.

"We worked on it here, but obviously he had a million things to think about. So we figured, 'All right, we'll get that ironed out eventually.' He came back from the summer and he had it down like he'd been doing it for 20 years."

And while the offense is being installed again from the start, the coaches hardly have to start at Chapter 1 for Mariota.

"He's able to get to Chapter 2 and 3 on each play where with a lot of rookies you're just hoping they pick up Chapter 1 and will eventually get to the next couple things," McNulty said. "We didn't have to start over with him, we get to higher-level protection stuff and what-ifs."

Mariota motivated by starting job
Titans QB Marcus Mariota discusses the confidence that comes with being named the starting quarterback and what he's learned from practicing in full pads during camp.