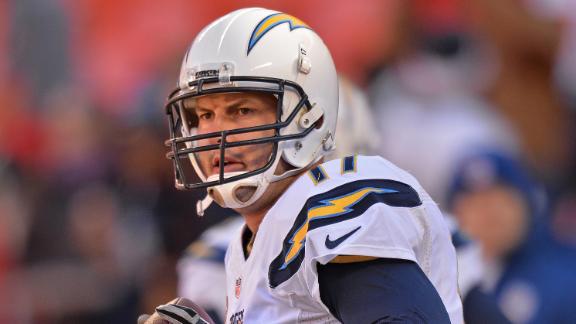 PHOENIX -- Essentially asked the same question several different times over a 45-minute period during the AFC coaches breakfast at the NFL owners meetings Tuesday, San Diego Chargers coach Mike McCoy did not waver on the future of quarterback Philip Rivers.

"The only thing I'm worried about is this next season," McCoy said. "We can't worry about 2016 and beyond. He's under contract for this year, and we plan on Philip Rivers retiring a Charger."

Rivers, 33, is entering the final year of his contract. He's scheduled to make $15.75 million in 2015. Rivers says he intends to play out the deal, rather than enter into negotiations with the Chargers on a contract extension.

"It's not the first time a player has done this," McCoy said. "And so I'm looking forward to the 2015 season, and I think so is Philip. And so everything is all speculation right now."

Chargers general manager Tom Telesco indicated Monday that the possibility of San Diego trading Rivers is not on the team's radar.

Fueling speculation that the Chargers might be willing to move on from Rivers is the fact San Diego is scheduled to work out former University of Oregon quarterback Marcus Mariota in April. Mariota is projected as a top-10 pick in this year's draft.

The Tennessee Titans hold the No. 2 overall pick. Titans coach Ken Whisenhunt served as San Diego's offensive coordinator during Rivers' resurgence in 2013. And Nashville is about 100 miles from Rivers' hometown in Alabama.

McCoy said San Diego working out Mariota is just part of the evaluation process in anticipation of this year's draft, and not a statement on Rivers' contract status.

One of the reasons McCoy and the Chargers remain bullish on Rivers is the amount of success the NC State product has had during the coach's tenure in San Diego.

Among quarterbacks who have played every single game since the start of the 2013 season, Rivers is No. 3 in passer rating (99.5), No. 2 in completion percentage (68.0) and tied for third in touchdown passes (63).

With the possibility of the franchise relocating to Los Angeles in 2016 and the desire to see if the Chargers are being built to contend for a deep playoff run, Rivers is keeping his options open.

However, the Chargers can keep Rivers around beyond 2015 by simply applying the franchise tag.

"He's one of the best in the business, especially with what we do in our system and the way we give him the flexibility at the line of scrimmage," McCoy said. "With the success he's had the past two years, we're expecting him to have an even better year this year, and everyone else around him."

Plan Is For Rivers To Retire A Charger
Sal Paolantonio, John Clayton and Ed Werder discuss the Chargers future of QB Philip Rivers, who says he has no plans to sign a contract extension.