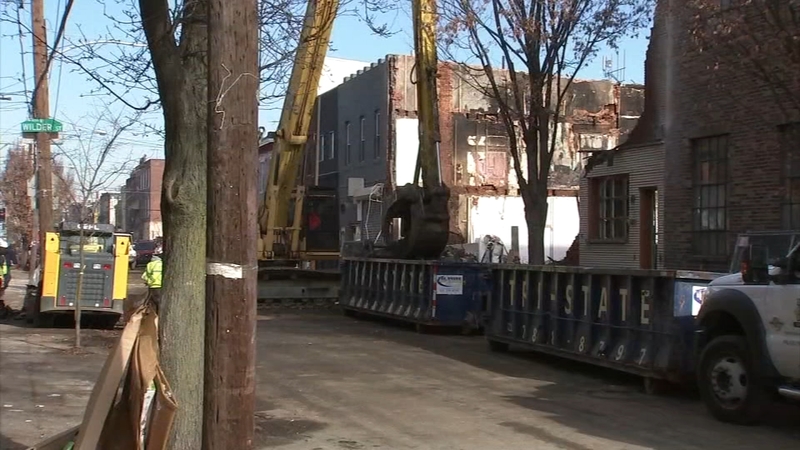 PHILADELPHIA (WPVI) -- Cleanup continued on the 1400 block of South 8th Street in South Philadelphia on Monday. The neighborhood has been deep in recovery mode following the massive explosion that leveled several homes and sparked a massive fireball on Thursday morning.
On Monday, property owners Francis and Ditta Hoeber were able to return home after being evacuated. They were finally able to begin to assess the damage.

"We were the very lucky ones, cause we lost neighbors. You know, the neighbors who you know by sight you see year in and year out and they've lost everything," said Hoeber.

The Hoeber's, like many in the neighborhood, are mourning the loss of the two lives lost in the fire.

"A situation like this, as horrible as it is, it also tells you that you got neighbors and friends and people around you who are good people who are ready to help," he added.
Action News learned one of the victims had a sibling that attended the Academy at Palumbo High School.

On Saturday, the second victim was pulled from the rubble.

Authorities have not identified the man, but neighbors who know the family, tell Action News the 65-year-old who was in the homes suffered from a stroke and was unable to move.

"My heart goes out to that family, they work hard. They were customers of mine and good people and I can't imagine what they are going through right now," said Mike Seccia of Cosmi's Deli.

Seccia, who captured the inferno on video, said in the days following the fire, the community has come together to try and heal after the horror.

Many shops have been giving out food and drink to displaced families and first responders working in the area.

"You know, I don't need a pat on the back. I'm just happy that we could aide in some way, and think that's what it is everyone pulling together," he said.