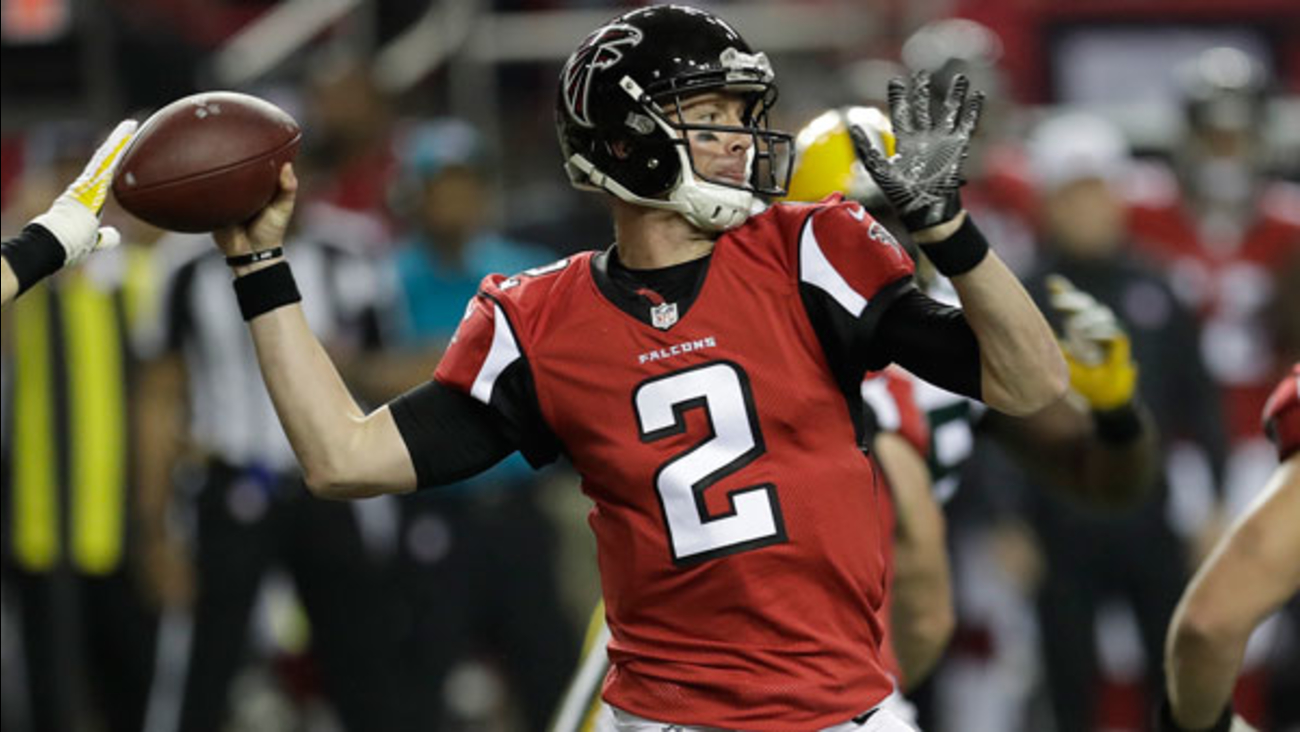 ATLANTA (WPVI) -- Matt Ryan tumbled into the end zone, slammed the ball to the turf with a thunderous spike, and let out a scream that showed just how much he wanted this game.

He wants the next one even more.

With another MVP-worthy performance and plenty of help from Julio Jones, Exton's Matty Ice guided the Atlanta Falcons to a 44-21 rout of the Green Bay Packers for the NFC championship Sunday, a showing that erased any doubts about whether Ryan can win the big games.

In his ninth season, he's finally headed to his first Super Bowl .

Matt Ryan's Road to the #SuperBowl:

"We'll enjoy it because it's hard to get to this point. I know that from experience," Ryan said. "But our ultimate goal is still in front of us."

Exton in the house! Congrats to Matt Ryan.

The Falcons (13-5) will face Tom Brady and the Patriots on Feb. 5 in Houston, just the second Super Bowl appearance in Atlanta's 51-year history. Eighteen years ago, they lost to Denver in John Elway's final game.

New England, heading to its ninth Super Bowl, blew out Pittsburgh 36-17. The Patriots opened as a 3-point favorite.

Ryan threw for 392 yards and four touchdowns, but it was his 14-yard scoring run - his first TD on the ground since 2012 - that really set the tone .

Jones was right in the middle of things, too. After barely practicing during the week because of a lingering toe injury, he finished off the Packers with a 73-yard catch-and-run on Atlanta's second snap of the second half, pushing the lead to 31-0 and essentially turning the rest of the Georgia Dome finale into one long celebration.

"He's a beast," Ryan said. "I've been lucky to play with him as long as I have. He was impressive today. I know he wasn't feeling his best, but he's a warrior."

Jones finished with nine catches for 180 yards and two scores, which included a toe-dragging catch for a 5-yard touchdown with 3 seconds left in the first half, sending the Falcons to the locker room up 24-0.

After the break: the play that showed every one of Jones' remarkable skills . He blazed down the middle of the field, shook off LaDarius Gunter's attempt to grab him on a cut toward the sideline, hauled in the pass from Ryan, broke Gunter's diving attempt at tackle, and defiantly knocked away Damarious Randall's with a brutal stiff-arm.

"I didn't practice that much throughout the week," Jones said, "but today I came out and gave it all I had."

Ryan sparked more delirious chants of "MVP! MVP! MVP!" as he carved up an injury-plagued Packers secondary that had no way of stopping a team that averaged nearly 34 points a game during the regular season and romped to a 36-20 victory against Seattle's Legion of Boom last week.

The Packers, riding an eight-game winning streak and coming off a thrilling upset of the top-seeded Dallas Cowboys , got a taste of what they'd be in for on Atlanta's very first possession. Driving 80 yards in 13 plays, the Falcons converted three third downs, the last when Ryan scrambled away from pressure and flipped a shovel pass to Mohamed Sanu for a 2-yard score.

Aaron Rodgers pushed the Packers quickly into Atlanta territory with a 27-yard pass to Jordy Nelson, who missed the previous game with a rib injury. But Mason Crosby, who hit two field goals longer that 50 yards in the closing minutes against the Cowboys, pushed a 41-yard attempt right of the upright to snap a playoff-record streak of 23 straight field goals.

The Falcons drove the other way, settling for Matt Bryant's 28-yard field goal and a 10-0 lead. Then, with Green Bay poised to make a game of it, Atlanta's much-maligned defense - one of the lowest ranked in the NFL - came through a momentum-swinging play. Fullback Aaron Ripkowski was breaking tackles and rumbling toward the end zone when Jalen Collins stripped the ball from behind and fell on it just across the goal line for a touchback.

"Their offense is hot right now," Rodgers said. "Playing a team like that, you've got to start faster. We had no points in the first half. You're not going to win many games like that."

After the fumble, Ryan hooked up with Jones three times for 56 yards and finished it off from the 14 with some surprisingly nimble running skills, faking out one defender with a pump fake before sprawling into the end zone.

"I just saw a lane open up," said Ryan, who had a 1-4 record in the playoffs over his first eight seasons. "That's the longest run I've had in a while. It came at a good time."

Atlanta's defense, an afterthought compared to the other side of the line, kept the Packers out of the end zone until the game was essentially locked up.

Rodgers finished 27 of 45 for 287 yards and three TDs, but he also threw an interception, was sacked twice and faced a relentless Falcons rush.

What a send-off for the Georgia Dome, the Falcons' home since 1992, which will be torn down and replaced next season by $1.5 billion Mercedes-Benz Stadium.

With the home team comfortably ahead, the raucous crowd of more than 71,000 partied through the second half, bouncing along to rap music that turned the stadium with the big top-like roof into the world's largest dance club.

The intensity of the celebration was understandable, given the Falcons' largely forgettable history and the heartache doled out by all of Atlanta's pro sports teams. The Braves, way back in 1995, are still the city's only team to capture a big league championship.