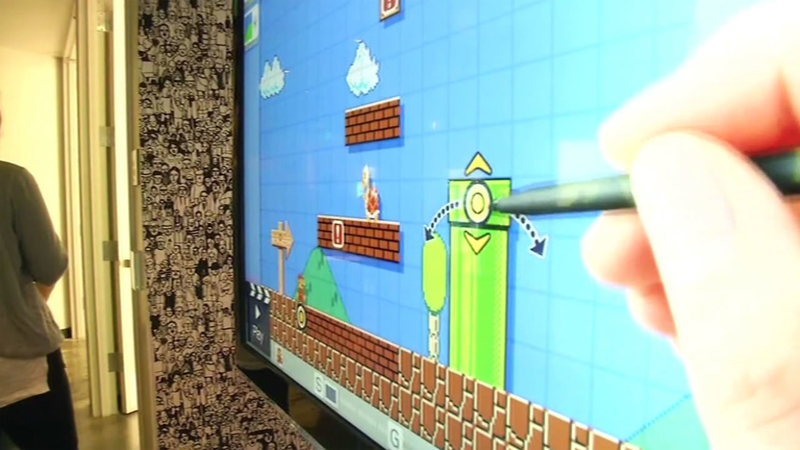 MENLO PARK, Calif. (WPVI) -- Of all the video game characters, few are quite as famous as Mario and it may be hard to believe, but this year he's turning 30.

A new Super Mario game was being tested at Facebook headquarters Wednesday in celebration of the beloved character's birthday.

"A new game in the series called Super Mario Maker that allows players to actually create their own Mario stages for the first time ever," said Kit Ellis Nintendo of America spokesperson.

It was being tested before its release. Facebook has long been known for its hackathons, but this is a programming contest of a different sort.

Using the touch screen on Nintendo's Wii U controller, players can place bricks, coins, turtles and mushrooms in the way they want.

"Growing up, you have these sort of views of your dream jobs where it's like, 'I want to make Mario,'" said Brandon Dillon a Hacakthon contestant and game designer.

This hackathon comes with a healthy dose of nostalgia. For a lot of the folks who work at Facebook, Mario was practically a childhood best friend.

"Certain things are like,'Oh, I remember that airship, that looked awesome," said one Facebook employee.

"The music is all the same too, which triggers a lot of memories, which is fun," said another Facebook worker.

Like any game, the contestants in the hackathon are playing to win.

"The winning stage, that team's going to have a chance to upload that stage to represent all of Facebook, so that's going be available for everyone who has smm to play after the game comes out," Ellis said.

Nintendo's releasing it on the Wii U in September, but this visit to Facebook could be a sign of things to come.