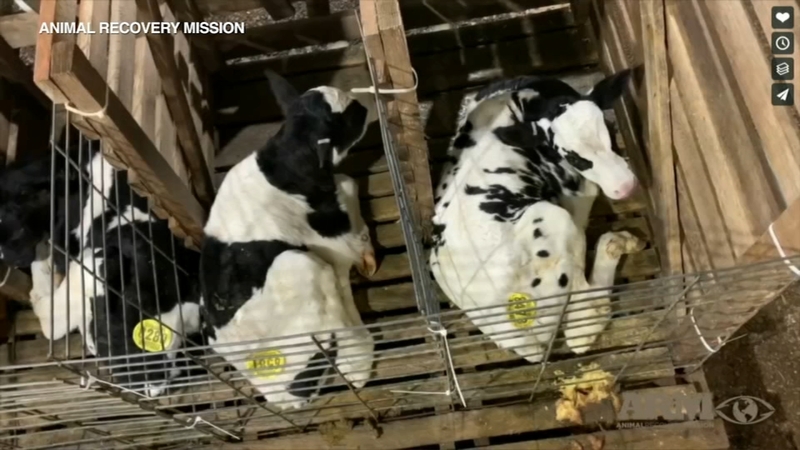 Representatives for ARM released undercover videos Tuesday of what they said is an independent investigation depicting "disturbing evidence of ongoing animal cruelty."

ARM said one of its investigators spent three months conducting an undercover investigation at the Prairies Edge North Barn between August and November 2018 after being hired as a calf care employee, and what was witnesses was troubling.

The video released on social media shows calves being stabbed and beaten with steel rebars, hit in the mouth and face with hot branding irons, subjected to extreme temperatures and denied medical attention.

Fair Oaks Farms founder Mike McCloskey released a statement on the farm's website saying he was unaware of any animal abuse taking place on the farm.

"It is with great disappointment to find, after closely reviewing the released ARM video, that there were five individuals committing multiple instances of animal cruelty and despicable judgement. I am disgusted by and take full responsibility for the actions seen in the footage, as it goes against everything that we stand for in regards to responsible cow care and comfort. The employees featured in the video exercised a complete and total disregard for the documented training that all employees go through to ensure the comfort, safety and well-being of our animals," the statement said in part.

In the statement, McCloskey said after reviewing the video he was able to identify five people committing "multiple instances of animal cruelty and despicable judgement." Four were farm employees, while one was a third-party truck driver, McCloskey said.

McCloskey said three of the farm employees had already been terminated prior to the video's release, having been reported to management by coworkers for animal abuse. According to McCloskey, a frame-by-frame review of the video shows those three employees were responsible for the majority of the abuse. The fourth employee was terminated Wednesday, he said.

The Newton County Sheriff's Office said they are aware of the video and activities, and have launched an investigation into the claims. They are seeking the names of the involved workers and anyone who witnessed the abuse and failed to report it.

Jewel Osco has announced they are pulling Fairlife products from their shelves following claims of animal abuse at the Fair Oaks Dairy Farm in Indiana. Police say they have launche

McCloskey said the farm is notifying the transportation company about the truck driver caught on the video, and said the driver will not be allowed on the farm again.

McCloskey said the company will investigate all claims and take disciplinary action on anyone who violates humane animal care practices.

Sheriff's officials said they have requested information on Fair Oaks Dairy Farm employees who may have been fired due to the allegations, and are working with the Newton County Prosecutor's Office to file charges.

Retail store Jewel Osco announced Wednesday they are pulling Fairlife products from their shelves in wake of the video.

"Jewel-Osco is removing all Fairlife products after an undercover video was made public showing the inhumane treatment of animals at a Fair Oaks Farms in Jasper County, IN. At Jewel-Osco we strive to maintain high animal welfare standards across all areas of our business, and work in partnership with our vendors to ensure those standards are upheld. We apologize for any inconvenience," Jewel Osco representatives said in a statement.