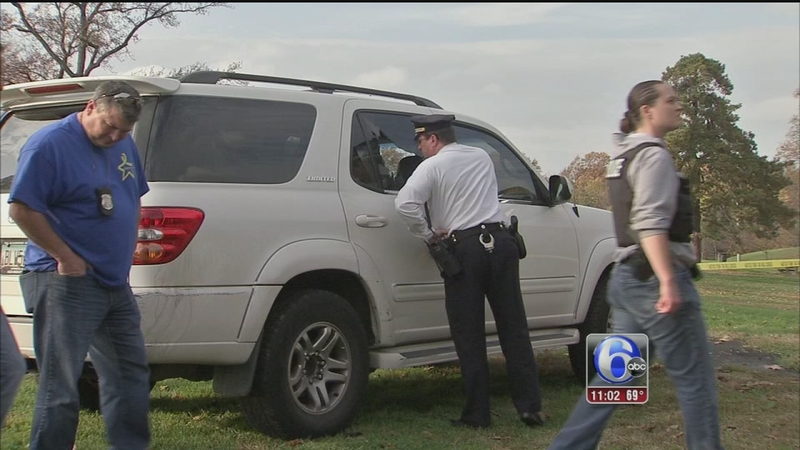 FAIRMOUNT PARK -- Police say a 25-year-old man and a 32-year-old woman were found dead inside an SUV in Philadelphia's Fairmount Park on Friday afternoon.

They had been shot in the head, police say, and were pronounced dead at the scene.

The early word from investigators was that the incident is a double homicide, but the exact circumstances remain under investigation. Police say this could also be a murder-suicide.

The victims' names have not been released. Police say a black male and Hispanic female were in the vehicle and partially clothed.

Police said they have determined that the two had been dating.

The incident was reported at 2:40 p.m. in the 800 block of Lemon Hill Drive when a maintenance crew emptying trash cans found the victims inside the rear of the vehicle.

They approached the SUV because it was parked in an unusual place and a back window was broken out.

Police say it appears the window was shattered by a bullet, and it also appears the shot came from inside the vehicle.

Crime scene investigators were on the scene trying to trace the path of the bullet.

So far, they haven't found a gun - which could be under one of the bodies. They'll take a closer look after towing the SUV to the city morgue with the bodies inside.

Shortly after news of the discovery broke, a woman came up to police and identified herself as the man's girlfriend. She said he had been missing for a while.

She said the 'find my iPhone' app showed that his phone was at the scene.

The SUV has Arizona license plates, and the girlfriend told police the man had been with a woman who owned that vehicle.

"It is a local person, even though the car has Arizona tags," said Capt. Ray Convery.

After her arrival, the man's mother and grandmother arrived on the scene demanding answers, but police couldn't tell them much.

Police are left with a lot questions here, but they say there's no danger to the public. The victims were either targeted or this was a murder-suicide.