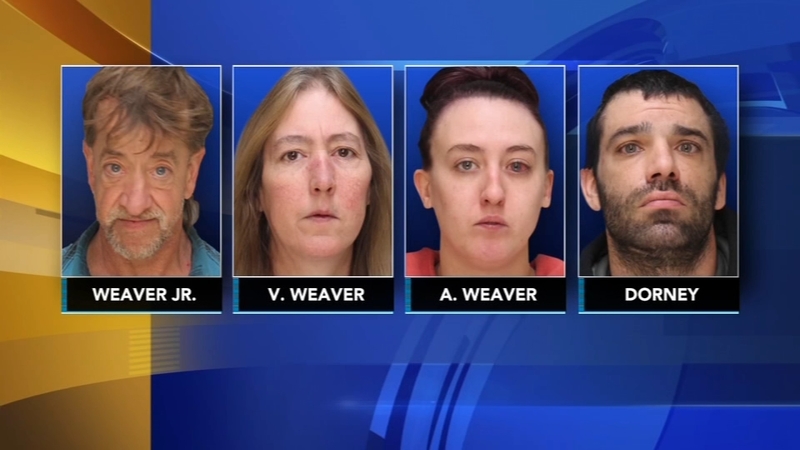 QUAKERTOWN, Pa. (WPVI) -- Members of a Quakertown-area family are facing felony charges for the fatal neglect of their 84-year-old patriarch and allegedly cashing his pension checks - even after he had died.

The victim, Albert Weaver Sr., died in November 2016 after being hospitalized for starvation and septic shock from deep, infected bed sores.

Authorities said the suspects lived rent-free in a pair of houses that the victim owned on the 100 block of Union Road in Richland Township.

According to police, Dorney was the one who eventually called for an ambulance on November 10, 2016.

One of the responding paramedics told police that Weaver "looked like a skeleton with skin hanging on him," according to a probable cause affidavit. The document also said that he told hospital workers "Help me!"

Virginia Weaver acknowledged that her father-in-law complained of pain from sores that had been developing over six months, yet at the time of his death he had not been to a doctor in the past 11 months, the affidavit said.

Once at the hospital, further examination revealed that Weaver was so malnourished that his body had begun consuming its own tissues and organs for sustenance, according to court documents.

Investigators said one bedsore was so severe that after dead tissue was removed the bones of Weaver's spine were exposed.

All four suspects are charged with neglect of a care-dependent person and recklessly endangering another person.

An investigation of Weaver's bank account showed it was jointly held by Albert Weaver Sr. and Virginia Weaver since it was opened in 2013.

Between that date and January 2017, the affidavit said, more than $150,000 was deposited into the account, mostly from Albert Weaver Sr.'s pension and Social Security payments.

By January 2017, the balance stood around $500, the affidavit said, with only approximately $6,500 having been put "towards items that were immediately identifiable as being associated with Albert Weaver Sr.," the affidavit said. Those items consisted of insurance premium payments and property tax payments.

For three months after Weaver's death, the affidavit said, Virginia Weaver continued to endorse and deposit her father-in-law's pension checks from AMETEK Inc. She is charged with stealing more than $3,000 in this manner.

"All of them were benefiting from him financially. Living in his own home, rent free, utility free, he was paying for all of their bills," said Bucks County Deputy District Attorney Kate Kohler. "All they had to do was take care of him and they did not do that."

Neighbor Susan Casey had no idea her neighbor was being neglected.

"I never in my wildest dream thought there was someone lying in there dying," she said.

Their next court appearance is tentatively set for April 5.