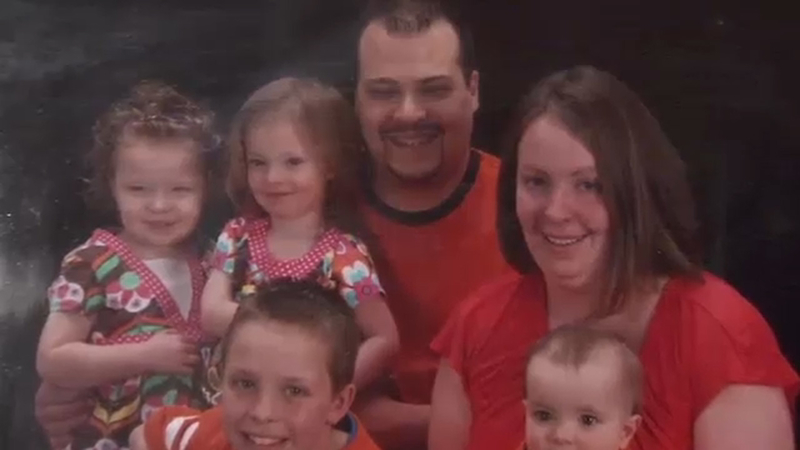 UPPER HANOVER TWP., Pa. (WPVI) -- The family of a Montgomery County man who was killed in a hit-and-run this week is trying to come to grips with their loss, as the search continues for the driver who caused his death.

The car driven by 38-year-old William Bender of East Greenville was hit from behind on Route 663 at Northgate Boulevard in Upper Hanover Township around 4:45 p.m. Monday.

The impact sent Bender's vehicle into oncoming traffic, where it was then hit by another car.

"He was rear-ended, his car veered off to the other side of the road and he was t-boned," said Megan Bender, the victim's wife.

Pictured: The scene of a hit-and-run crash in Montgomery County that left 38-year-old William Bender dead.

Bender was just two miles from home. His children expected to see their dad walk through the door that afternoon.

"I didn't really get to see him at all before he left for work," said his daughter, Hailey.

By Tuesday evening, metal fragments from his black Honda Civic surrounded a bouquet of flowers left at the scene.
"Why? Why do my kids have to grow up now without a dad? Why do I have to be without a husband?" Megan said.

William was described as selfless and always positive. The father of four commuted to Southwest Philadelphia for his job at SEPTA, which he just started back in the spring.

He had plans to move the family to be closer to work.

Pictured: Wiliam Bender, the victim of a hit-and-run crash in Montgomery County, is seen here with his family.

"He would do anything for anyone," said Hailey.

"He would do anything for us to have a good life," said her brother, Alex.

The family, desperate for closure, is asking for their father's killer to have a conscience.

That vehicle was only described as being burnt orange or faded red in color.

Anyone with information is asked to contact Pennsylvania State Police in Skippack at 610-584-1250.