FBI: Armed protests planned in all 50 states between now and Inauguration Day 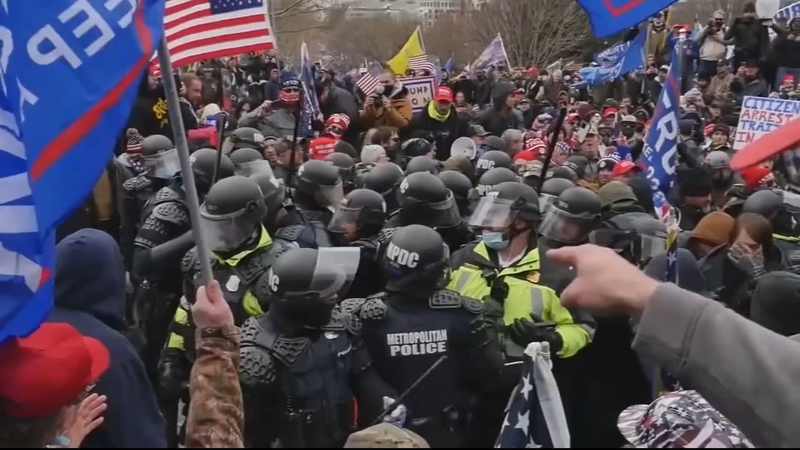 FBI: Armed protests planned in all 50 states over next 10 days

PHILADELPHIA (WPVI) -- Starting this week and running through at least Inauguration Day, armed protests are being planned at all 50 state capitals and at the US Capitol, according to an internal FBI bulletin obtained by ABC News.

In addition, the FBI has received information in recent days on an identified group calling for "storming" state, local, and federal government courthouses and administrative buildings in the event Donald Trump is removed as president prior to Inauguration Day.

"The FBI received information about an identified armed group intending to travel to Washington, DC, on 16 January," it read. "They have warned that if Congress attempts to remove POTUS via the 25th Amendment a huge uprising will occur."

The group is also planning to "storm" government offices in every state on Inauguration Day January 20, regardless of whether the states certified electoral votes for Biden or Trump.

"My assessment is that we are in a heightened state of national emergency," said Jack Tomarchio, who served as the Principal Deputy Under Secretary for Intelligence and Analysis Operations in 2007. "I would make sure that I had adequate manpower and, yes, adequate fire power to deal with these threats."

Tomarchio said there was plenty of chatter on social media prior to the assault on the Capitol.

He said the feds should be preparing for worse case scenarios not just in Washington, but in cities like Philadelphia between now and Inauguration Day.

"I'm also worried about the days leading up to Inauguration Day, particularly the 17th of January, which has been billed as the Million Militia March on Washington and also marches on 50 state capitals," said Tomarchio.

The FBI bulletin included a map that showed the extent of law enforcement activity related to potential threats surrounding election certification and the inauguration.

Pierre Thomas has more on a warning from the FBI about possible armed protests planned in all 50 states over the next 10 days.

Army Gen. Daniel Hokanson, chief of the National Guard Bureau, told reporters Monday that the Guard is also looking at any issues across the country,

"We're keeping a look across the entire country to make sure that we're monitoring, and that our Guards in every state are in close coordination with their local law enforcement agencies to provide any support requested."

As of Sunday, approximately 29 individuals and/or social media accounts of individuals who unlawfully entered the US Capitol had been identified.

The FBI has received nearly 45,000 digital media tips that are now being reviewed.

On top of information being distributed by the FBI, the Department of Homeland Security's intelligence office, a day after the siege at the Capitol, released situation report headlined "Threats Surrounding the 2021 Electoral College Certification."

It opened this way: The Office of Intelligence and Analysis "assesses individuals harboring violent extremist ideologies and other violent actors likely will continue to threaten or target elected officials, other public figures, and members of the general public who these actors perceive as opposing their worldview, which is consistent with past attack plotting and historical drivers for violent activity. (The Current and Emerging Threats Center) remains in communication with the Intelligence Community to ensure any threats concerning government operations are identified."

The FBI bulletin also stated unequivocally that Officer Brian Sicknick "died from injuries sustained during the US Capitol breach."